POLICE have slammed three girls for taking a selfie on the edge of a cliff, known to be a popular suicide spot.

A shocking snap taken by officers shows the teens perched on a ledge over a 20-metre drop.

The trio of millennials were trying to capture the moment at the Santa Catalina hill in Gijon, where a couple also accidentally fell to their death, according to El Espanol.

Policia Local officers then travelled on foot to rescue the minors, calmly asking them to return to the mainland.

The operation reportedly lasted several minutes, before cops explained to the young daredevils why their actions were dangerous.

An online statement from the Policia Local Gijon read: “Do you really think this is a safe place to take selfies?

“This afternoon we intervened with a group of young people who did not see the risk.” 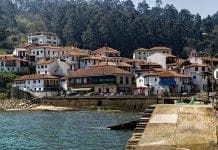