TWO wines in the Valencian Community have been named as joint-winners in a nationwide contest to find the ‘best value in the supermarket’.

The tempranillo red from Utiel-based Hoya de Cadenas was one of the three winning wines, joined by the monastrell of Alicante-based winery Mo Salinas Monastrell.

The Valencian duo was joined by Rioja-based Cune Crianza in the ‘Los Mejores del Súper’ contest adjudicated by journalist judges around Spain.

The Mo Salinas Monastrell meanwhile is a mix of 85% monastrell grape with 10% cabernet sauvignon and 5% Garnacha tintorera.

The 5-star rating offered by the supermarket guide takes into account several factors: taste, information given to the consumer, and the sale price. 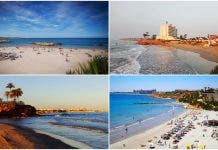