THE red alert weather warning has been extended into Monday with 130km/h winds, 8m-high waves and 40cm snowfall predicted for Spain’s Costa Blanca.

The northern and interior regions of Alicante province are the centre of the weather warnings, according to Spain’s met office (AEMET).

The red alert will last until noon, with an orange alert remaining in place until Tuesday.

The 40cm snow warning is expected to hit areas of 600m altitude.

Gale force 9 winds are expected to whip up 8m-high waves, particular in the coastal city of Denia.

Rainfall up to 150mm is also expected for lower altitudes as storm Gloria makes her way down eastern Spain and towards north Africa.

It comes as schools are closed across the Costa Blanca region, while a man has died in Asturias after being hit by an out-of-control truck. 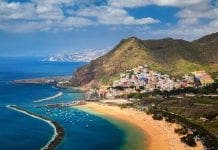 Simon Wade - 30 Mar, 2020 @ 16:39
SAN FULGENCIO Local Police in the Vega Baja area of Costa Blanca South have made a pledge to lighten the lock-down blues...