THIS is the moment a vicious Russian fugitive was arrested on Spain’s Costa del Sol.

The unnamed man, who was wanted after taking a nurse hostage in Germany, was found living on the streets of Nerja.

A known carrier of an infectious disease and classed as risk to public health, German authorities warned Spanish police that he would not be afraid to bite to pass on his unknown infection.

They also classed him as armed and dangerous.

He was found living in a tent after fleeing from Germany in November.

The criminal had been transferred from prison to a hospital for treatment when he took a nurse hostage by holding a makeshift knife to her neck.

He threatened to kill her if the guard did not let him leave the hospital in the town of Gunzburg.

A European Arrest Warrant was issued by Germany for hostage taking and breaking his sentence.

He was tracked down to Spain and an investigation was launched by Policia Nacional.

It is believed other Russians in the country were helping the wanted man lay low.

He moved through Barcelona, Madrid, Cadiz and Malaga before being found in a tent in Nerja.

He was found living with other Russian homeless people when officers swooped in for a speedy arrest.

The extradition process is believed to be in progress. 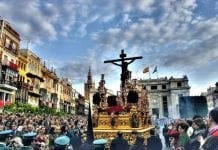