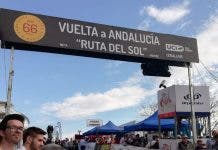 A BULGARIAN man has been cuffed for allegedly shooting a compatriot to death before dumping his body on the side of the road in Marbella.

The suspect, 46, was arrested in Germany in a joint operation between the country’s Federal Police and Spain’s Policia Nacional.

It came after a 40-year-old Bulgarian was found dead in a ditch on the A-7176, between Marbella and Istan, on October 27 last year.

Within 10 days Spanish police had identified their main suspect and tracked him down to Germany some five days later.

They seized his vehicle – which had been rigorously cleaned and had different number plates – and searched it for evidence.

The joint task force discovered the victim’s blood and 5.6kg of cocaine in a hidden compartment.

The suspect was held in Germany and is set to be extradited to Spain for a trial.

Investigators believe the Bulgarian arrived to the Costa del Sol a few days before carrying out the killing – believed to be a settling of accounts between rival gangs.

In a search of the house he used in Marbella, police found a taser gun and other weapons and items used in the hit.

He is facing charges of murder, drug trafficking, falsifying of documents and illegal possession of weapons.