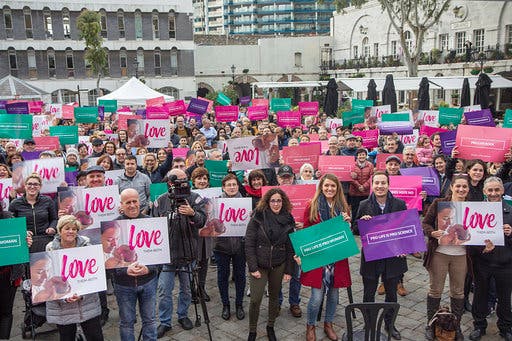 THE Gibraltar Pro Life Movement has held a rally on the Rock ahead of the abortion referendum in March.

The anti-abortion activists gathered for the second time at around 5.30pm in Casemates Square yesterday in an event which saw speakers from the US and the UK parliament.

MC Stefanie Yeo told the crowd: “We are here because we believe in a Gibraltar that protects our unborn children and supports our mothers into the future.

“We are here because we are united in favour of a NO vote on 19th March. Our motto is Save Babies and Vote No and that is what we are asking the people of Gibraltar to do on 19th March.”

Speakers included a mother from the US who regretted having an abortion and British politician and member of the House of Lords, David Alton, who blasted the UK for ‘having 200,000 abortions per year.’

Meanwhile children lit candles on stage to ‘represent the future generations of Gibraltar.’

The rally closed with an announcement that the movie Unplanned would be shown in Gibraltar next week and a trailer was played.

Patricia Parody, Chairperson of GPLM commented after the event:

“We are really pleased with the event this evening and the energy and momentum within the pro-life side.

“We are confident that the people of Gibraltar, when they are fully informed of what the proposed law means, will opt to save babies and support mothers on the 19th of March by voting No.”

James Warren - 17 May, 2021 @ 17:30
RESIDENTS of Gibraltar are tentatively celebrating as the government have revealed that for the first time in just under a year there are zero...

17-year-old charged with spate of robberies across Gibraltar

Curfew pushed back to midnight in Spain’s Balearic Islands and interior areas of bars and restaurants can open under...

SLOW DOWN: Speed limits for drivers reduced in Spain’s Castellon