THESE next few weeks might prove difficult for those wanting to have a cheeky drink at night on the Rock.

The Gibraltar Government has announced that all bars, clubs, nightclubs and restaurants will close to reduce the chances of Coronavirus spreading.

The decision to temporarily shut these establishments altogether is being contemplated and the decision will be made ‘within the next few days’.

This one of the many measures to be introduced in Gibraltar to fight the spread of a virus that has ravaged Italy and now Spain.

Social distancing is thought to slow the spread of the virus ‘by up to 60%’.

It is considered the most important measure that can be taken to prevent the spread of the virus, which became a pandemic on Wednesday.

During this time, fast food take-aways will be open as normal, and delivery services from restaurants and cafeterias will be allowed to continue too.

Customers are urged to maintain an arm’s length away from others in queues and to pay electronically instead of using physical cash.

This comes after the government has urged there being as little social activity as possible, with events like the abortion referendum and Gibraltar Calling later this year already cancelled.

Look out for a unique report as The Olive Press talked to businesses in the Casemates area. 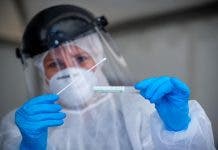