ONLY workers who show proof of employment in Gibraltar will be allowed to enter the territory according to the Spanish national police.

A work contract or payslips are necessary to enter the British territory after the Coronavirus State of Emergency was declared in Spain.

Spanish National Police officers in La Linea have told The Olive Press that these measures are being taken for ‘security reasons’ after Madrid’s lockdown of the country.

Reports are also coming in that Gibraltarians are being turned back at the frontier with Spain by police.

After the Spanish central government imposed a state of emergency on the country, anyone trying to enter the country for anything but essential services are allegedly being blocked at the land border.

Only yesterday, the Gibraltar Chief Minister Fabian Picardo asked Gibraltarians to ‘respect them and these measures’.

“Her Majesty’s Government of Gibraltar therefore recommends that residents of Gibraltar should not travel into Spain, on foot, in a vehicle or by any other means, unless such travel is for essential purposes,” said the government said yesterday.

The State of Emergency Decree was meant to run from midnight on Monday March 16, but was brought forward to Saturday night instead.

Under the lockdown, citizens and residents may not leave their homes unless they need to buy medicines, food, attend health centres, care for dependents or go to the bank.

The restrictions will be enforced by the police backed up by the military as the number of Coronavirus cases continues to grow.

Fines of up to 30,000 euros could be imposed on anyone not obeying this Royal Decree.

Cross-frontier workers are also expected to suffer after all restaurants, bars and cafes were closed down on the Rock.

“We are clarifying with Spanish colleagues that those coming to work in Gibraltar will be able to do so in the normal way,” said the Chief Minister.

“Workers in the catering sector will need to get confirmation from their employers of whether or not the businesses that they work for will be operating next week.”

Gibraltarians who are living in Spain are being asked to ‘familiarise to themselves’ with the lockdown imposed by Madrid.

“We share a land frontier with Spain and it is important therefore that those of our citizens who live in Spain should be aware of the terms of the State of Emergency which have now been decreed in Spain,” said Picardo.

“The decree restricts the right of persons to move around in Spain.”

Although reports are coming in that people are being turned down entry to Gibraltar from Spain unless they have a work permit, these have so far not been confirmed.

“I believe that the measures being taken by the Spanish government are, no doubt, being taken on the proper Public Health advice and are designed for a country of Spain’s characteristics,” concluded the Chief Minister.

“We must respect them and as a neighbour we must assist them in these measures having the required effect.

“The virus knows no frontiers and we will continue our own work, based on our Public Health professionals’ advice, to implement the best plan for Gibraltar.

“This will slow down the inevitable spread of the virus in Gibraltar and in that way help the most vulnerable in our community.” 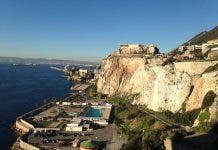 Diexter Thomas - 27 May, 2020 @ 22:09
There are not enough fully-trained lifeguards to start taking care of the beaches, said the Chief Minister after a few sea rescues in recent days.