SPAIN could get €140 billion from the EU’s coronavirus recovery plan, it has been announced.

That money would be split between €77 billion in grants and €63 billion in loans, from the €750 billion COVID-19 recovery programme that the European Commission announced earlier today.

According to EFE, Spain would be the second highest beneficiary among EU nations, only behind Italy.

This plan still needs the approval of the EU Parliament along with the thumbs up from all 27 member states.

European Commision President, Ursula Von Der Leyen said: “We either all go it alone, leaving countries, regions and people behind, and accepting a Union of haves and have-nots, or we walk that road together.”

Commission Vice-President, Josep Borrell, defined it as a quantum leap in European solidarity.

Northern countries however have expressed worries that this could mark the beginning of ‘a union of debt’, as the countries hardest hit by the virus are the Mediterranean ones that rely heavily on tourism, such as Spain, Italy and Greece.

Spain’s central bank issued a report today noting that the impact of the pandemic has affected members of the EU differently.

The report states that the impact on the Spanish economy has been up to 20% larger than the German or French one, due to Spain’s reliance on tourism. 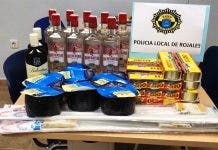 Alex Trelinski - 29 Sep, 2020 @ 12:55
THE RATE of new COVID-19 cases is falling in Alicante Province according to the latest data supplied by the Valencian Health Ministry.