A MAN has been arrested on the Costa Blanca for recruiting young people to support the Islamic State terror group.

He was denied bail at a court appearance.

The operation to track down the man was jointly carried out with Europol as his internet activity was closely monitored.

He used extensive cyber security measures to try to stop authorities finding out where he lived.

The Guardia Civil said that the Moroccan looked to attract ‘young people to back the Islamic State group and to radicalise them’.

Targets were identified on social media and then invited onto private messaging groups where the man distributed material promoting the terrorists.

The Guardia added that a second person was arrested and subsequently released.

He was said to have been ‘radicalised’ by the Moroccan and gave a statement to the National Court. 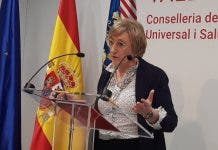