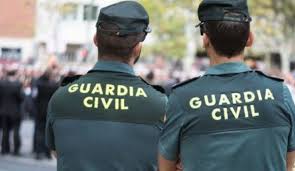 TWO HAPLESS thieves were chased by Torrevieja Police after an off-duty Guardia Civil caught them robbing a bar, only yards from the nearby barracks.

As the agent was walking into work to start his shift, he witnessed the well-known duo inside a bar just after 5.30am on November 26.

The pair, one English and one Spanish, fled as more Guardia were informed and an early-morning foot-chase ensued through the streets.

A bag of tools (pictured) used in the robbery was thrown away as the pursuit continued.

One of the assailants tried assaulting agents when he realised he couldn’t be out-run, whilst his partner in crime tried to jump over a two metre wall and into a field.

When caught, both men (aged 31 and 35) were detained without bail, after being charged with robbery, resistance, serious disobedience to agents and threats of violence.

As well as the tools used in the robbery, 318 euros stolen from the bar and items such as gloves and balaclavas were also found.

Joshua Parfitt - 16 Jan, 2022 @ 17:00
HAVE you seen an orange scarf with holes at each end in Albacete? You will have made thousands of people's day after social media joined...