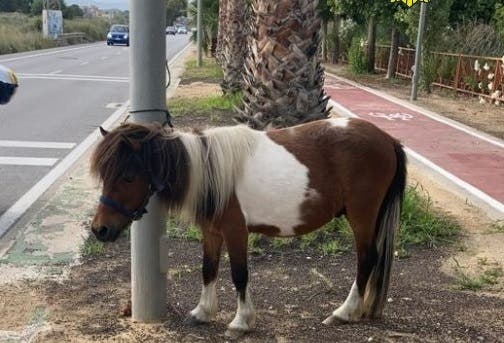 Residents on Avenida del Padre Angel Escapa noticed the strange sight of the animal ambling close to what is a busy road.

They called the police because they were worried that it could walk onto the carriageway and cause an accident.

Alicante’s Policia Local despatched two units to the scene to rescue the pony.

There was no clue about its owner and whether it had been abandoned or somehow got lost.

Vets said that the animal was in excellent health with no injuries and had been well-fed.

Alicante council’s animal protection department is now caring for it.

Policia Local inquiries are continuing to find the pony’s owner with one theory being that it escaped from a farm.