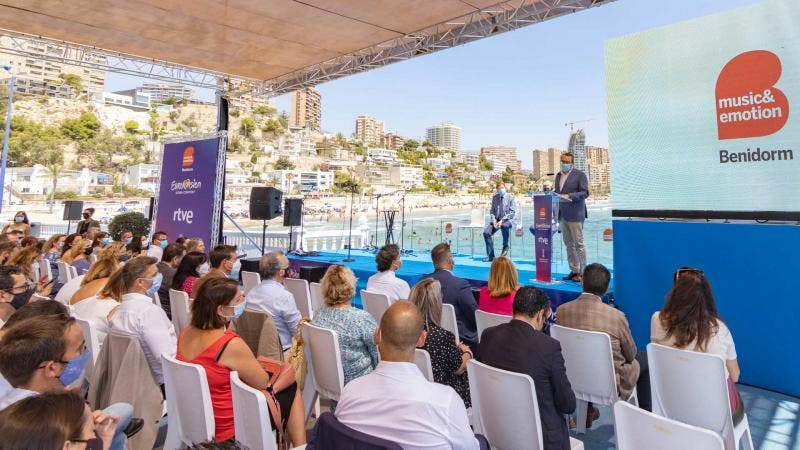 BENIDORM will host a new brand-new festival to pick Spain’s entry for next year’s Eurovision Song Contest in Italy.

Public broadcaster, RTVE, has signed an agreement with Valencian president, Ximo Puig, and Benidorm mayor, Toni Perez, for what it described as an ‘annual meeting point for the promotion of Spanish music’.

That was taken as a strong hint that 2022 might be the start of a long Eurovision association with the Costa Blanca resort.

The formal announcement and signing of the deal was made on the city’s Paseo Tamarindos.

Entertainment was provided by Murcia’s Ruth Lorenzo who performed her 2014 Eurovision entry ‘Dancing in the Rain’ which finished in a respectable tenth place.

All of Spain’s subsequent entries have totally bombed, prompting criticism that RTVE has not treated the competition seriously.

The new selection format will be similar to that of Italy’s San Remo festival that produced this year’s rock band winners, Maneskin.

The Benidorm event will consist of two semi-finals and a grand final held on successive days.

RTVE’s content head, Amalia Martinez de Blasco, said the shows would ‘probably’ take place in January which has been the traditional month that Spain chooses its entry.

No details have been given about a possible venue or what the festival will be called.

“Eurovision is very important for RTVE, as it is one of the most important events in the European Union and we get the biggest audience of the year that connects with young people,” said Martinez de Blasco.

She announced that a series of music experts would join a working group to work out the shape of the festival to offer ‘good songs, a well-produced visual spectacle and boosting Spain’s music talent’.

The country has had a poor recent record in the Eurovision Song Contest, which has only been surpassed by hapless entries from the United Kingdom.

Spain has finished in the bottom six in the last six years and got no public votes for this year’s song performed by Blas Canto.

OLIVE PRESS 2014: READ HOW THE BOOKIES GOT IT RIGHT AND WHAT THEY MADE OF RUTH LORENZO