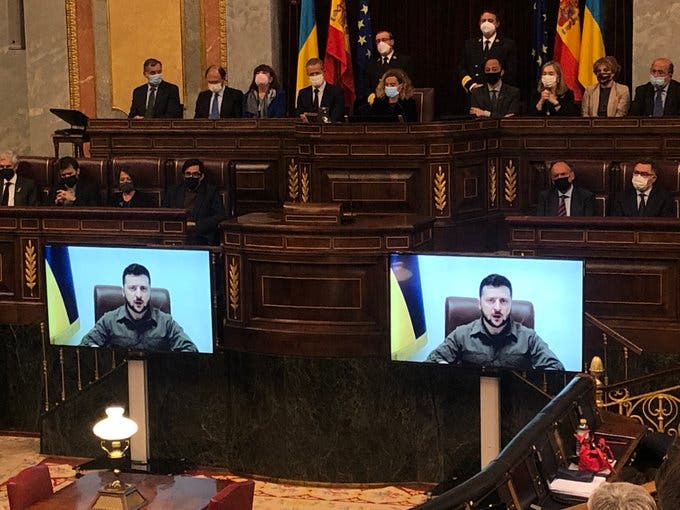 He appeared via video-link at the unanimous invitation of all political parties.

Senators and deputies filled the chamber in a rare joint-gathering of both houses to listen to the Ukrainian leader.

Zelensky praised Spain for its support in their resistance to Russia’s invasion last February.

He appealed for ‘more weapons and sanctions’.

Zelensky said: “I know that the defence of democracy and peace on the European continent is very important for Spain. But how do we achieve it if Russia piles in resources to destroy everything?”

The president also had strong words for Spanish companies that still trade with Russia.

Zelensky said: “I know that many Spanish companies have stopped operating in Russia, and I want to thank those companies and all the people.”

“There are however companies like Porcelanosa or Maxim and others that are still doing business and should know better,” he added.

In a reference to the aerial bombing suffered by Basque town Guernica during the Spanish Civil War in 1937, Zelensky said: “In April 2022, the people of Ukraine are hiding in attics. Imagine people hiding in Guernica in April 1937.”

“Imagine mothers in Ukraine writing on the backs of their children the names and contact numbers of friends and relatives, in case the occupiers kill their parents, so that they have a chance,” Zelensky continued.

Besides parliamentarians, ambassadors of EU and NATO states were in the guest gallery of Congress, along with Ukrainian refugees and expats.

Cristina Hodgson - 2 Feb, 2023 @ 09:15
SKILLED road maintenance operatives work around the clock in an effort to open the blocked Sierra Nevada road this weekend. At least eight people were...