LOOK up. Autumn, a time of change in the Andaluz skies – when the eternal featureless blue of summer begins to give way and the first reliably cloudy days begin to make an appearance.

Clouds add depth, distance and perspective to the flat summer canvas of blue. Without clouds, a sunrise is a flat affair. Clouds are the stuff of paintings and poetry; their changing shapes populate the skies with dragons, castles and goblins. We can see in their continually changing form and colour, whatever our imagination is equal to.

But clouds also tell stories. Learn a few simple rules, unlock their secrets and the skies will never look the same again.

Clouds are collections of water droplets so tiny and light they float in the air like clay particles in a muddy puddle. Each speck of water reflects or blocks sunlight, casting shadows or refracting light into millions of miniature rainbows. Put enough of them together in one place and you have a cloud – the physics of the atmosphere made visible!

How those droplets get there, is mainly a matter of temperature. Air is rarely completely dry – it holds water in the form of invisible vapour. The warmer the air, the more water vapour it can hold. Lower the temperature and air will begin to shed its load of water vapour through the process of condensation – when water vapour turns into water droplets and becomes visible.

(This might be a good point to nip and make a cuppa – while you are at it, think about that cloud that forms just outside the spout of the boiling kettle.)

So, our first rules in cloudology are: warm air holds more water vapour than cold air and when air cools condensation can happen, changing invisible water vapour into masses of water droplets (clouds).

Now, let us explore some of the ways the air around us can cool to the point at which clouds form for it is here the heart of the story of a cloud lies.

Thinking of walking up Mulhacén this year? If so, take care. On average, air temperature falls by around 1 degree for every 100-metre increase in altitude. On Mulhacén (3,482 metres) this means unless you have your woolies on, it is possible to freeze to death at the summit when the temperature at the start of your departure point was a comfortable 15 degrees.

Now, think about what will happen to a wind blowing up from the Mediterranean Sea. As it climbs the mountain, it will cool until it ditches water vapour in a fit of condensation and…ZAP! A cloud. So, when you see one hanging over the top of a mountain, picture the river of invisible air crawling up its flanks and finally betraying its presence with a cloud.

As our wind clears the mountain and flows down its leeward side, it warms again, evaporating its water droplets back into vapour and fading once more into invisibility. This leaves just a single cap of cloud hanging motionless.

Sometimes, the air can be so charged with moisture that an explosive, unstable mixture is formed and a magical thing happens. Then, it is time to nip up to the roof, open a bottle, sit back and watch the show!

Yegen, perched on the side of a vast bowl formed by the Sierra Nevada, Gador and Contraviesa mountain ranges, is well-placed for shows of this kind and I have often watched enthralled as a demon rears its head to the north.

When unstable air climbs and cools, huge amounts of heat are released as vapour condenses, forming giant spouts of buoyant air which explode skywards. As the heat released by this condensation kicks in, the effect is like igniting booster rockets, forcing the air column higher. Things are out of control now. All it takes is that first nudge by the mountain for warm moist air to blast skywards, manufacturing vast cumulus clouds and releasing more heat as it goes. Now, a self-perpetuating cycle has started which will only end when there is no moisture available to fuel the reaction, or it slams into a barrier of warmer air above and can rise no further.

Our cloud is now so dense that it shuts out sunlight to its interior, blackening it to a cumulo-nimbus thundercloud. Inside the cloud, currents of air rise and fall, bringing air molecules into violent collision, causing friction. The air becomes a gigantic electrical generator, building up colossal voltages inside the growling cloud until the insulating effect of the air is shattered. A line of plasma streaks out and in a flash, Yegen is transformed into a Kaminski painting of pink, violet and ultramarine as lightening joins the show.

Radiating out from the line of wrecked air, a pressure wave carries thunder at 1,000 kilometres per hour to deafen, astonish and frighten the rooftop watcher. When the blast wave encounters the sounding walls of Gador and the Contraviesa just over a minute later, it is flung back as a series of echoes that deepen in pitch as they bounce back and forth. The listener finds it difficult to understand how the sky can generate so much noise, or how the earth can contain it.

As the storm treads its way out over the void of La Alpujarra, it calms awhile, growling and resting after the exertions of the north. Soon the flanks of the Contraviesa and Gador whip it into a rage once more and send it on its way to disturb the gin & tonic crowd and scatter the golfers down in the coastal urbanisations.

Welcome to the wonderful world of rising air! Next, we will take a look at the most beautiful and mysterious skies of all – the high lenticular clouds. Till then, look up! 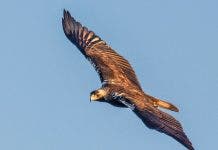 Have you spotted any of these 13 birds in Spain’s Andalucia this autumn?

INDIAN SUMMER: Spain’s autumn to be warmer than usual and with less rainfall, particularly in Andalucia 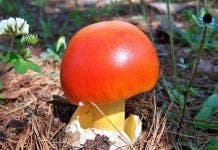 We are the champinones: Mushroom feature