Emilio Silva, director of the ARMH (Association for the Recovery of Historic Memory) shares the Civil War story of his own grandfather with Lisa Tilley

MY grandfather, Emilio Silva Faba, was a member of a left-wing party, the Izquierda Republicana – quite a moderate one led by the Republican President, Manuel Azaña. During the 1930s, he participated in the progressive politics of his town, for example, they opened the first secular public school – which is something that didn’t exist then, there were various schools but they taught from a religious syllabus. He had been a small businessman, with a successful shop in the pueblo, but when the war started the Falangists of the town began to demand money from him. 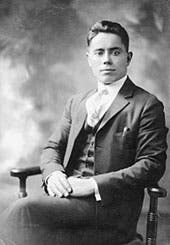 Then, on October 16, 1936, he was taken to the ayuntamiento (town hall) where they forced him into a van together with 14 other men. They were driven 30 kilometres from the town, assassinated and left in a communal grave.

During the posguerra [post-Civil War period] Franco carried out a number of exhumations, but didn’t allow the families of the Republicans to rebury their dead relatives or investigate the truth.

Decades later, I was working as a journalist for a magazine and, in 2000, I started writing a book about his story. I went to the area of Ponferrada de León where I started asking people what they knew. I was lucky to find out what happened to my grandfather; I found people who knew him, including the man who buried him and people who were connected to him in one way or another.

From there I arranged a group of archaeologists and forensic experts who excavated his bones and identified him.

So we started the association to which I belong and the movement for the recovery of historic memory with the aim of uncovering the truth about the disappeared Republicans.

The assassination of my grandfather was first and foremost a tragedy, because it took from my family all they had. And my father, then a schoolboy, had his tenth birthday three days after his father was assassinated; just as I turned ten, 11 days before Franco died. They went from being a family with certain economic resources to having nothing. So my then ten-year-old father, being the oldest of six children, had to leave school and go to work building a new road so that his brothers could eat.

I say the tragedy for this family started with the assassination of my grandfather but then they had to endure being governed by the assassins for the next 40 years.

Life was very hard; to keep a family going during the posguerra was very hard. Hundreds of thousands of emigrants left Spain in the 50s and 60s and most of those were the descendents of those killed in the Civil War – because our country had so few opportunities they were forced to leave Spain to work.

Now for my family, especially for my father who is still alive, to recover the remains of his father has been very important.

Now he is on the home-straight of his life and it was very important for him to live to gain some answers.

You can imagine that this is something very important for him.