ON a recent trip to the most northern of the Canary Islands, Lanzarote, I was amazed at the breathtaking landscape and sheer diversity of food.
Lanzagrotty it certainly ain’t, despite the hordes of package tourists arriving from Southampton, Bournemouth and Belfast.

Once out of the handful of resorts (admittedly none of them in the league of Benidorm, San Antonio or its near neighbour Playa de las Americas in Tenerife) the island is strikingly beautiful.

Pitted with copper coloured volcanoes and fields of lava stretching down to undeveloped coves, it is quite unlike most of the Spanish mainland.

While almost devoid of trees (palm trees being the exception), it is amazing that anything grows in the most unusually rocky black volcanic soils.

But there is a surprisingly good wine industry here, and the island grows much of its own vegetables, sown into hollows in the soil to protect against the strong winds.

This diversity is matched by the island’s restaurants, a healthy mix of local spots and more upmarket, experimental cuisine – and reflected in a new guidebook to its cuisine.

We initially based ourselves in the centre of the island in what must easily be one of the most charming small hotels in Spain. 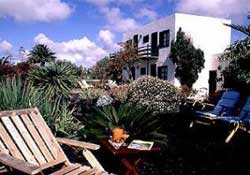 The timeless cortijo Caserio de Mozaga was the ancient home of a winemaking family, who have been in business for over a century.

A classic, colonial-style retreat full of lovely antiques it has been beautifully conserved by one of its ancestors, a capable young man Gonzalo. The family vineyard El Grifo is nearby and well worth a tour, its flinty whites the pick of the bunch.

While the hotel has a fine and atmospheric restaurant, with live Jazz or classical music on Saturday nights, we were blown away by the nearby French-run place Strelitzia, in the tiny village of Tiagua.

Sitting in a romantic dining room we were served the best capaccio of beef with foie gras imaginable followed by rack of lamb and then profiteroles and a tarte tartin.

Starting with a Kir Royale is always nice and the decent range of wines from around Spain was a turn up.

But a couple of restaurants on the island even get awards from the Michelin guide, with Amura, a Patrician-style yachtie place in Puerto Calero, getting a ‘red meals’, while Le Tegala in Macher is probably deserving of a star for its stylish modern approach.

More authentic perhaps is the Restaurante Casona de Yaiza, in Yaiza, which has a charming hotel next door, while the beach restaurant at Playa Papagaya was special for lunch. 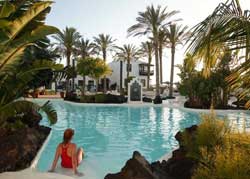 It was ultimately the beaches which so impressed during our stay. While later staying at the modern resort hotel Hotel Melia Volcan in Playa Blanca we were always just a short ten minute drive into the Papagaya national park, which is heavily protected from sprawl from the nearby resort.

A three euro fee kept most of the package tourists at bay and the string of five beaches were practically empty.

But best of all was on the other side of the island, where by complete chance we stumbled upon Caleta de Famara.

A windswept hamlet not dissimilar to Cabo de Gata in Almeria, it was a laid back spot where cars parked on a sandy high street, if you could call it that, and 90 per cent of visitors were surfers.

Little has changed since the 1970s and apart from some lovely sandy beaches there was a café, La Croissanterie, that served up the best apple cake freshly made every day.

The only thing grotty about Lanzarote was the tipping of the scales on our return.