To launch his new hotel book Small Hotels and Inns of Andalusia, the Olive Press asked seasoned travel writer Guy Hunter Watts to pick out his eight favourite hotels in Andalucia…. one for each province 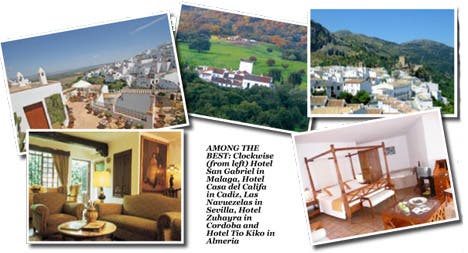 CHOOSING a favourite hotel in each of Andalucia’s eight provinces is a difficult call. I like to think that variety is the spice of my hotel guide and that every hotel has its own way of doing things.

But, claro, I do have preferences and tend to lean towards places with a big heart and a generous ethic with scant regard for ‘classification’; I agree with a hotelier friend who likes to insist that ‘the stars are in the sky’.

Here then are my eight favourites, by province. It was only after choosing them I realised that all but one are Spanish-owned and managed.

This was coincidental, but does reflect my belief that Andalucians are the very best of hosts.

Palacio de la Rambla
Úbeda’s old town bears witness to a period when a flourishing woolen trade made many a fortune for its merchant class; the opulence of its Renaissance mansions and churches comes as a wonderful architectural surprise. La Rambla dates from that Golden Age, a mansion house of delicate proportions wrapped round a cloistered and galleried patio. The Meneses de Orozco family have decorated the palace in keeping with its blue-blooded past with masses of the family antiques; paintings of their forebears, French chandeliers, engravings from England. Bedrooms are airy and high-ceilinged, bathrooms superb and breakfast better than most. Add to this the quiet out-of-time atmosphere, the ever-smiling manager Rosa, beautiful Úbeda right on your doorstep and you begin to get the measure of this exceptional hostelry.

Cortijo de los Mimbrales
In the heart of the Doñana national park and just a five-minute drive to the larger-than-life Rocío sanctuary and its languid lagoon, Mimbrales is one of southern Spain’s most flamboyant small hotels. The approach to this low, hacienda-style building – it lies at the heart of a vast citrus plantation – is appealing enough, but it is the striking use of colour that singles out Los Mimbrales. Ochre, sienna, cobalt blue and terracotta washes provide an eyecatching backdrop for exhuberant gardens and fabulous rooms and suites, all decked out with a commingling of antique furnishings and contemporary art. The beautiful high-ceilinged La Cantina restaurant has the same jazzy vibe and is a great place for a meat or a fish feast.

Las Navuezelas
Luca and his wife Mariló were making waves at Las Navezuelas long before the phrase turismo rural entered the vernacular and their small country hotel has won several awards. The setting is deeply bucolic; a low whitewashed lagar with a sweeping panorama of rolling dehesa stretching away for miles and miles. The decoration of bedrooms and communal spaces is in simple, rustic vein and the food philosophy is similarly unpretentious: wholesome, but with no airs of grandeur. You wake to birdsong, breakfast to Bach, and dine to the strains of flamenco: an aural as well as a visual feast is guaranteed. Set time aside to hike in the Sierra Norte national park: the Huesnar river valley walk is particularly memorable.

Hotel Casa del Califa
The history of Andalucia is wrapped within the fabric of La Casa de la Califa’s ancient walls. An ancient road – perhaps Phoenician – girdles its garden, the Moors built a huge aljibe, the Inquisition officiated here and the Nationalists used the place as a barracks in the Civil War. In the most recent chapter of Califa’s history the house has been rebirthed as a small hotel whose plexus of twists, turns, staircases and patios is the antithesis of the off-the-peg, chain hotel. Bedrooms – stylish, comfortable and uncluttered – vary in size and configuration and many grab a view of Vejer’s wonderful roofscape. Sculpted into the rocks at the rear of the building is a patio-garden where you dine beneath citrus trees on cuisine inspired by the flavours of North Africa.

Hotel Tío Kiko
Agua Amarga is one of the prettiest resort villages on Andalucia’s battered Mediterranean coast. New development is pushing up the hillside but a ‘keep it low’ philosophy has meant that the place retains a lot of its charm. Tio Kiko slots in well among its near neighbours with its rounded lines and cubist jumble of volumes. The focus of the hotel is the sea and the spare, minimalist style of decoration, with big white sofas, planters-style chairs and big splashes of bright contemporary art, imparts an airy, uplifting feel. Bedrooms are big and light with king size beds bedecked with bright bedspreads and cushions, sisal-matted floors and hardwood Indonesian. Each room has its own terrace, a big marbled bathroom with twin sinks and a hydro-massage tub.

Hotel Zuhayra
Zuheros is a quintessentially Andalucian village, a jumble of whitewashed houses clinging to an outcrop of limestone rock, topped by a high castle, surrounded by a sea of rolling olive groves. If you make the detour be sure to stay at Hotel Zuhayra. From the outside it’s an unexciting edifice but thanks to its lofty location all bedrooms have great views out across the town. They are sparklingly clean with simple pine furniture and with bright fabrics for bedspreads and curtains adding a twist of colour. The first floor restaurant is really cosy with a small menu that looks to the best of traditional, Andalucian country cuisine. Specialities include salmorejo, remojón, aubergines cooked with honey and interesting salads.

Hotel San Gabriel
San Gabriel is at the heart of the old town of Ronda, just yards from the gorge and bridge. This is every inch the grand, seigneurial town house: a coat-of-arms above an entrance of dressed stone, wrought iron rejas festooned with a rampant honeysuckle, and a grand sweep of staircase leading up to the bedrooms. The feel is more home than hotel and you soon slip into a ‘let’s relax’ mood in the quiet drawing room where there are masses of books, magazines, rugs, tapestries and family photos. Next door is a billiards room and a tiny cinema and there’s a cellar bar for a pre-dinner glass of fino. What makes it doubly special is the exceptional kindness of the Arnal Pérez family who welcome you as they would family and friends.

Hotel Casa Morisca
Casa Morisca is among a number of Albayzín mansion houses which have been transformed into a small hotels. As the name suggests the house’s architecture has clear Moorish influences; wafer brick columns, delicate keyhole arches, polychromatic tiles with Arabic calligraphy and intricate mudéjar ceilings. This is a great place to prolong that Alhambra moment and many of the fourteen bedrooms look out to the Comares tower. They are decorated with warmth and style with intricate Alhambra-style moldings, bright kilims, pastel colours and fabulous bathrooms. You breakfast in a barrel-vaulted dining room to the murmur of the courtyard fountain and when it comes to other meals you’re spoilt for choice: the lively Acera del Darro is yards away and the Plaza Nueva a five minute amble.