THE Sahara desert will envelop Spain and most of southern France and Italy.

Venice, New Orleans and Holland will be underwater, while tigers and lions will have been eaten – by the ten per cent of mankind that is still left!

This is what scientists are predicting, in just four decades if the world warms by only 4°C according to New Scientist magazine. 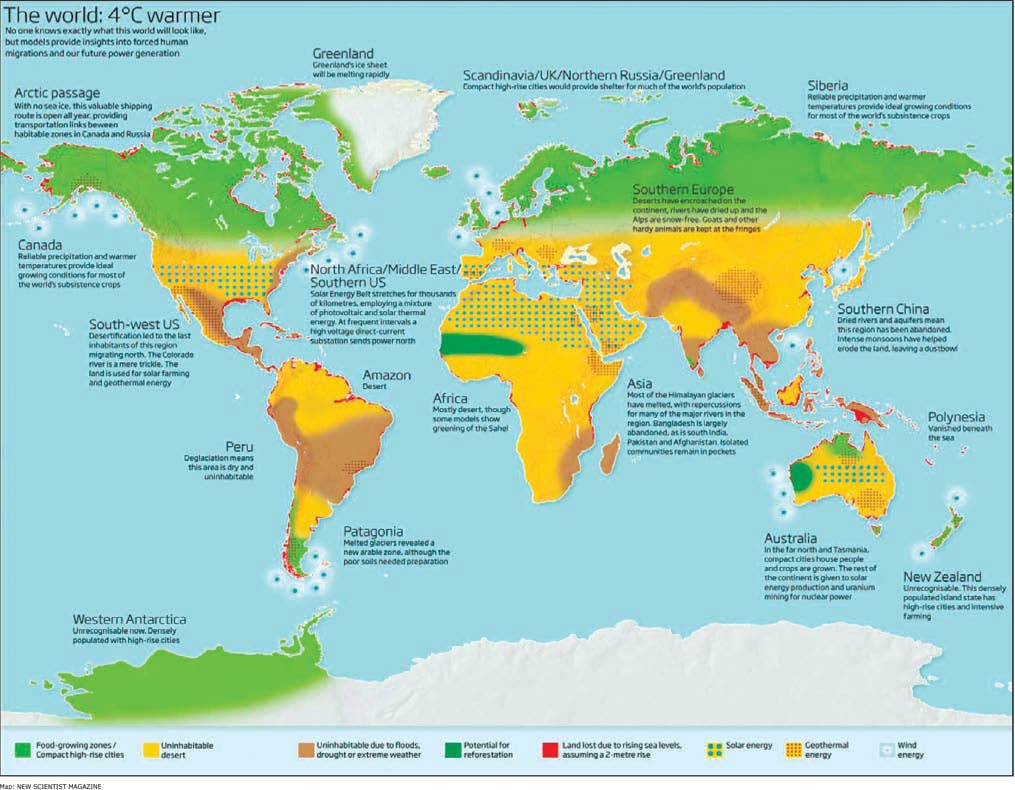 Rivers would disappear, as would entire species such as elephants and rhinos. Most marine life would be extinct, as well as 90 per cent of the human race.

In fact, about the only thing they don’t agree on is when it will happen, with many believing it could be as soon as 2050.

Peter Cox of the University of Exeter, who studies climate systems, says: “Climatologists tend to fall into two camps. There are the cautious ones who say we need to cut emissions and won’t even think about high global temperatures — and there are the ones who tell us to run for the hills because we’re all doomed.

“I prefer a middle ground. We have to accept that changes are inevitable and start to adapt now.”

The new predictions have come after claims that we are well behind stemming global warming.

Most scientists believe that nowhere near enough is being done to adhere to the cuts needed.

Globally we are increasing our output by three per cent

While they say we need to make cuts of 75 per cent in our emissions over the next decade, globally we are actually increasing our outputs by three per cent.

Some are predicting a rise of 6 degrees in half a decade. But if the planet warms by only an average of 4°C — as it might this century — it will change beyond all recognition.

All of the world’s major deserts are predicted to expand, with Africa’s Sahara reaching right into central Europe, while we would see Europe’s rivers drying up, from the Danube to the Rhine.

The only places with guaranteed water would be in the high latitudes.

Former NASA scientist James Lovelock, one of the UK’s most highly regarded environmentalists, says: “Everything in that region will be growing like mad. It’s where all the life will be.

“The rest of the world will be largely desert with a few oases.

“Humans are in a pretty difficult position and I don’t think they are clever enough to handle what’s ahead.

“I think they’ll survive as a species but the cull during this century is going to be huge.

“The number remaining at the end of the century will probably be a billion or less. And you can forget lions and tigers — if it moves we’ll have eaten it. People will be desperate.”

The world’s population would relocate to the coolest regions — including Britain, Scandinavia, Russia, Canada, Greenland, New Zealand and North Australia. However, with less land the world will be crowded and food scarce.

Human survivors’ diet will be mostly vegetarian — as the seas become acidic with higher amounts of dissolved carbon dioxide killing off most marine life.

This is not the first time the world has faced a catastrophe on this scale.

Similar temperature rises occurred 55million years ago, when vast quantities of methane bubbled explosively from the deep ocean, filling the atmosphere with carbon and wiping out sea life.

Sadly we have no survival lessons to learn from it — mankind didn’t develop on the planet until quarter of a million years ago.

Nobel prize-winning scientist Paul Crutzen says: “I would like to be optimistic that we will survive but I’ve got no good reason to be.

“In order to be safe we would have to reduce our carbon emissions by 70 per cent by 2015. At the moment we are putting them up by three per cent… ”