FANCY somewhere different to lay down your towel this weekend? Is the Costa del Sol just too busy and the Costa de la Luz too windy? Fed up looking for a place to park and a beach with more than a postage stamp of space to lie on?

Well, here is an alternative . . .in the mountains about half way between Ronda and Antequera.

It’s called the Malaga Lake District and while there has been no William Wordsworth eulogising its beauty – nor have there been many mentions in guidebooks – take it from me it is the hot tip for cooling off this summer.

It’s not only a brilliant alternative to the overdeveloped beaches of Fuengirola and Marbella – and a break from the relentless winds of Tarifa or Vejer – it is also almost completely unspoilt.

Quieter – and a good deal cheaper – than the coastal towns, the turquoise lakes were created when a dam was built in the 1920s across the dramatically-high Guadalhorce river gorge, known as the Garganta del Chorro.

You can pitch your tent along the shore at various campsites and there are a number of lovely lakeside beaches to lie on, not to mention swim off, so don’t forget your bucket and spade.

And this year, after one of the best winters for rain in recent memory, the lakes are reaching capacity again, having been as low as 30 per cent after four years of drought last year.

Little known to holidaymakers, the upland area, much of which has been designated a natural park, has a breathtaking mix of historic sites, villages and scenery.

Sitting amid craggy mountain surroundings, the lakes are a magnet for wildlife, with eagles, vultures and bee-eaters swooping around.

It’s ideal for a day trip from the coast or any of the inland towns… and it will appeal to the Indiana Joneses among your children.

As well as the lakes, they can look forward to ruined cities, swamps and tunnels through vertiginous rock. Alternatively, there are enough good hotels to make it a destination in its own right.

The perfect way to explore the Lake District is in a circular route starting at Ardales, and taking in perhaps Teba, Campillos, Fuente de Piedra and finally the delightful town of Antequera. 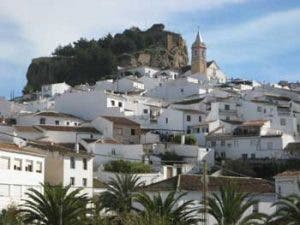 But Ardales best sets the scene for what is to come: a village tumbling down a hillside, bustling since Roman times, an amazing little church complete with ancient Muslim minaret, a cave complex with 60 Palaeolithic paintings from 18,000BC – and all just five minutes from the lakes.

A busy town with plenty of atmosphere, there are a series of good places to stop for breakfast or lunch, including restaurant Juan Vera, which has some excellent old photos around its walls and Casa Paco, which is your spot for tapas, and in particular, breakfast.

The road out of Ardales eventually meanders to the Garganta del Chorro gorge. You will want to stop every 100 metres to take a photo and the children will love the theme-park drama of the descent into the increasingly narrow ravine.

It’s certainly a humbling experience, as the sky darkens and you’re met with nearly sheer walls, sometimes 400 metres high. Make sure to stop at the Swedish-run tapas bar and chiringuito Bikers Heaven to refresh yourself in their natural sulphur-spring fed pool.

A protected oasis next to the chapel Finca la Ermita, where the annual romeria comes from Ardales, there is some great tapas and you can buy a bag of oranges or lemons for just a euro.

Later, through blinding sunshine reflecting off the lake’s surface below, we had to blink and suspend disbelief as we watched a group of thrill-seekers clambering gingerly along a path pinned to the gorge’s side 100 metres up.

Known as the King’s Pathway (or Caminito del Rey), it has become a rite of passage for teenagers and extreme sports enthusiasts.

With large sections missing and the handrail all but collapsed, the rickety wooden track requires a series of long, suicidal leaps – or in fact nowadays abseiling skills – and nerves of steel to attempt.

An explorers’ paradise – including a fantastic railway walk

It’s little wonder that the track, which has been officially closed since 1992, is on the verge of restoration.

The nearby village of El Chorro is small but a number of hotels and restaurants have sprung up to cater for climbers.

Its main allure is its position by Lake Gaitanejo and the spectacular soaring limestone crags that envelop it. An explorer’s paradise – including a fantastic railway walk which climbs up the side of the gorge.

Watch out, though – while this is just a branch line, trains do occasionally rumble past.

Fancy doing it the safe way, you can try a number of local adventure specialists including Casa del Lago Holidays, where Jacci and Rob Sheehy organise all range of fun and interesting activities, including quad biking, climbing and canoeing.

Another great excursion, by foot or car, heads up towards the ancient ruined city of Bobastro, with a turn off on the El Chorro to Ardales road. Also in El Chorro is German-run El Chorro Rock Climbing Shop.

An incredibly atmospheric place, continuing beyond it for another mile or so, you will reach a dead end and Bar La Mesa, surely one of the best sited restaurants in the world.

Not always open but if you are lucky, the owner will attempt to attract the local vultures by swinging a leg of ham in the air until they are circling en masse.

From here, head towards the main Guadalteba-Guadalhorce reservoir, where a winding road took us towards Campillos and Teba, going across dams and to more great lunch stops, including El Mirador, an earthy, organic affair, serving dishes with a spicy North African flavour and, in particular, great stuffed cabbage.

Nearby is the charming La Cantina, which is the oldest in the area and run by a charming local family.

For lunch or supper, by far the best place in terms of food is Yerbaguena in Campillos. En route to Ronda, you-ll find Meson del Diego.

Heading north, a few miles away from the cluster of lakes near El Chorro, but certainly worth the visit is Andalucia’s biggest natural lake, the Laguna de Fuente de Piedra.

It is the second most important breeding ground for flamingos in Europe (after the Camargue in France). Though in danger from drought over the last few years and encroaching farms, each year up to 20,000 pairs come to breed.

You can drive around the lake, and a visitors’ centre near the village of Fuente de Piedra gives advice, maps and tours.

While here, why not take a visit to the nearby Donkey Sanctuary, which is well signposted.

The journey back is on the windy road to Almogia, via the national park of El Torcal. Here, you can climb limestone formations, watching out for 30 types of orchid, until you’re high enough to see the coast of Africa.

One thing for sure, next time you are sweating in the car to take the kids to the beach for the weekend, give the Lake District a thought. And then dive in, all guns blazing.