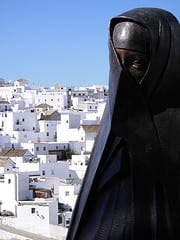 With Damien Hirst, Darryl Hannah, Jude Law and Paul Weller (below left to right) regular visitors, it was only a matter of time before a Cabinet Minister got in on the Costa de la Luz’s best kept secret, all expenses paid of course

WHEN a Cabinet Minister fancies a luxury Spanish escape – all expenses paid, of course – Vejer de la Frontera ticks all the boxes.

Off the beaten track, exclusive and with the appropriate number of stylish and upmarket hotels, it is the perfect location for a romantic tryst, or a retreat from the rat race.

Ask Paul Weller, Jude Law, or Hugh Cornwell, from the Stranglers, all regular visitors to the town.

Vejer has just the right balance of restaurants, chic boutiques and nearby unspoilt beaches on the delightful Costa de la Luz.

And, best of all – unlike its near neighbour the other side of Gibraltar – there are no tacky pubs offering live Premiership football, no lager louts and no British tourists walking around bare chested showing off tattoos.

It is no surprise then, to discover that a female Cabinet Minister has recently luxuriated at one of the many stunning hotels in Vejer.

Pampering herself at the stunning 180-euro a night Casa la Siesta, set in classic bull rearing territory to the north of the town, she enjoyed the infinity pool and the wonderful food provided by hosts Lee Thornley and Amelia Gordon, who previously ran trendy UK catering company Mange Tout.

“It was not too much of a surprise to have a minister staying,” explains Lee, who worked as a barrister for the UK government, before moving to Spain four years ago.

“What did make my ears prick up was when this big MP expenses scandal broke in the UK and the news talked about a minister putting her recent Spanish holiday on expenses.

“It didn’t say where she had stayed, but I can tell you the one who stayed here certainly paid with a House of Commons credit card. Whether it was her own personal one I couldn’t say.”

There is no doubt that Vejer has become the fashionable place to stay on Spain’s southern coast (it is actually 10km inland). Since being widely plugged as the ‘in place’ to visit in the British papers half a decade ago, the sparkling white town, half way up Cadiz’s Costa de la Luz, has had something of a mini boom.

Virtually unknown in 2000, the dazzling old Moorish redoubt has been ‘restored and polished to a burnished brilliance’, in the words of celebrated UK journalist Robert Elms, who has had a home in Vejer for a decade.

It is full of narrow windy streets, cavernous whitewashed palaces, and patios reminiscent of those so famous in Cordoba. It is a beautiful place to wander around and get lost.

Cascading down one side of a steep hill (the other a practically sheer drop) the authenticity of the place has very much survived, and late in the evening, or early morning, when the old town centre is sleepy and quiet, it is easy to find yourself back in the fabled Islamic caliphate of Al-Andalus.

First used as a hilltop fortress by the Phoenicians, and later dubbed Besipo by the Romans, it was the Moors that really made the place what it is today. Naming it Bekkeh (which sounds remarkably similar to the Spanish pronounciation of Vejer), it became a key agricultural centre on the western frontier of the Kingdom of Granada, until seized by Fernando III in 1250.

“Vejer is the jewel in the crown of the Costa de la Luz and is the antithesis of the Costa del Sol,” explains Tanya MacRae, who has turned a 10 acre plot inside the nearby Marisma del Barbate natural park into a delightfully sustainable, low-water use escape called El Sueno.

“Vejer has somehow escaped the worst ravages of corruption and overdevelopment. Sure there has been new construction, but it has been done quite carefully, and the old town has hardly changed and, if anything, is cleaner and more charming.”

MacRae, who is a cousin of the Duchess of York, continues: “It is a place for a romantic weekend and has a lovely selection of boutique hotels and wilder country retreats.”

There is no doubt that this huge range of places to stay has really helped to keep its upmarket allure.

But, it was completely by accident and ‘a fair bit of luck’ that the place got its cache, claims Spaniard Antonio Roldan, who moved to Vejer from Jerez, via London, 25 years ago.

The Olive Press is offering two lucky readers a two-night break at the town’s beautiful 5-bed CasaCinco Deli Hotel – the only one of its kind in Andalucia – including B&B and a special free Deli platter with a bottle of wine. Winners can take it any time when there is availability.

Please answer the following three questions correctly and send the answer to jon@theolivepress.es putting ‘vejer comp’ as the subject.

“It certainly had nothing to do with the authorities,” insists the former sherry boss, who runs a restaurant Antonio in the town. “It was all done by a small group of private entrepreneurs, all outsiders, who had a vision to conserve and look after what is here.”

One of these is James Stewart, a 47-year-old father-of-two, who fell in love with the wild, rugged Cadiz coastline over two decades ago.

Now owning various hotels in the area – the Casa de Califa, without a doubt one of the town’s key buildings – he has worked hard to bring to the area a more cultured, intelligent clientele, while still managing to keep the prices down.

“We have had so many famous people pass through our restaurant and hotel over the years,” he says, reeling off a list of names like a Who’s Who and including politician Michael Portillo, Spanish minister Magdalena Alvarez, comedian Keith Allen, socialite Athina Onassis, actors Daryl Hannah (“she kissed me”) and Javier Bardem and Talking Heads singer David Byrne.

His favourite though was Damien Hirst, the artist, famous for pickling sharks. “I really wanted him to trash a room and then sign it for future guests,” he jokes. “But he was actually really well behaved and a great guy. We had a fantastic time. I even ended up taking his Californian wife out surfing.”

Stewart embodies the type of erudite expatriate to have settled in the area. Respectful of local nature and a lover of the famous surf scene (and more recently kite surfing), he understands how vital it is to the area to maintain its near virgin coastlines.

“I keep trying to stress upon the local mayor and his councillors how important it is to protect the remaining coast.

“They keep planning these big hotel projects for the coast, which will bring in all these jobs, etc (see The new battle of Trafalgar). But if they just cleaned up what there already is, put in proper pavements, signposts, bins, information boards and cleaned the streets, more people would come and the existing hotels and rental houses would be fuller for more of the year.

“What I keep trying to stress is that what tourists really want is the virgin coastline, of which there is so little left in Spain.”

For now at least, with the recession in full swing, the wonderful nearby beaches at El Palmar and Canos de Meca stay relatively unscathed.

“What I keep trying to stress is that what tourists really want is the virgin coastline, of which there is so little left in Spain.”

While a host of illegal homes have sprung up over the years behind the beaches they are almost exclusively low rise and nothing like the scale of say, nearby Chiclana, or Marbella.

Sadly the chiringuitos (beach restaurants) have now all been removed at the swish of a pen from the town hall, in large due to one main offender, which held infamous late night beach parties or raves for years.

But there are still some excellent restaurants along the coast road and the beaches are clean, with white sand, and the place is about as peaceful as it gets out of season.

Back in Vejer, take a wonder around the old town taking particular notice of the lovely balconies, patios and wrought iron rejas, or window grills. Look out for the castle, which is Moorish in origin, but rather disappointing to visit, with remarkably little to see or do, unless of course you want to take a dance class at the local dance school. It was actually remodelled in the 15th century to become a summer holiday retreat for the dukes of nearby Medina Sidonia. 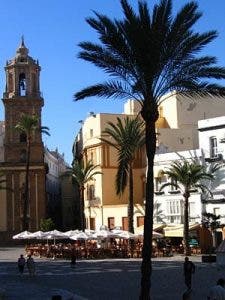 Nearby is the church of Divino Salvador, a 16th century rebuild over an earlier mosque whose minaret now serves as its tower.

Take a wander up Calle Rosario, perhaps stopping for a drink or meal at 12th century Casa Rural Leonor, and take a peek inside at its lovely Moorish arches (set alongside one of the 20th century’s best inventions, the microwave). Then head next door to have a look inside the oldest church in Vejer, which has now been converted into a flamenco venue, firing on all cylinders on weekend nights, particularly Saturday for the next two months, with heats for a national Flamenco competition taking place from 10.30pm.

Make sure to wonder down to the charming Plaza de Espana, the circular square where the Triana-style fountain and palm trees guarantee a pretty picture.

From here you should stroll back to La Plazuela along the Paseo de la Corredera, which has delightful views in all directions to the sea and inland to Medina Sidonia.

Just make sure to keep your camera handy and don’t just look at the landscape. You never know you might spot Hazel Blears, if not Kate Moss.