SPANISH police have made an urgent appeal for information on a dangerous man wanted for the suspected shooting of Irish father-of-two John O´Neill.

Police believe Scouser Darren O’Flaherty – who is wanted back home in the UK – is lying low in Andalucia.

The 35-year-old, from Kirkby, is suspected of shooting the Irishman after an argument in a Benalmadena bar on Wednesday.

Dubliner John O’Neill, 40, was gunned down in front of his partner and friends, while his children slept.

The father-of-two, who had flown to Spain for a friend’s wedding, is believed to have intervened in an argument to try to defuse the situation.

Witnesses said the row started when a British man began banging on the door of a locked cubicle in the men’s toilet.

Bar staff ordered the man to leave the premises but he returned shortly afterwards with a .38-calibre pistol.

He fired off at least five shots in and around the bar, one of which hit Mr O’Neill in the back. The gunman then fled.

British police also want to speak to O´Flaherty over the kidnap of a lorry driver, who was held at knifepoint, back in 2006.

Mr O’Flaherty was charged with robbery and kidnap but breached his bail in 2008.

He is alleged to have held up a lorry driver at knifepoint for several hours at the Londonderry lorry park in North Yorkshire with several other men.

The victim was then driven to Liverpool where electrical goods in the lorry were offloaded at a warehouse.

The lorry and its driver were then driven to Skelmersdale, Lancashire, where the driver was released and his vehicle set on fire.

North Yorkshire Police confirmed that the Spanish authorities had been in touch with them and they were working together to trace Mr O’Flaherty.

A spokesman said: “Mr O’Flaherty is still wanted over the 2006 kidnapping and robbery, for which he was charged in 2008.

“We have been contacted by Spanish police investigating a murder this week on the Costa del Sol as he is a suspect in that murder.”

The spokesman said he could not give more information out about the murder or the murder victim. 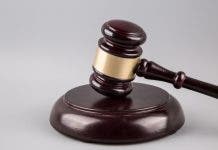