Take a tip from Courtney, Liz and Cheryl and take up the Blood Group Diet. David Mills had to become a vegetarian as a result, but he is very happy with the results

IT’S the plan that helps Courteney Cox, Cheryl Cole and Liz Hurley keep their bikini bodies, but is the Blood Group Diet sustainable and does it work?

Well, David Mills from Mills and Mills Medical group is living proof that it really does help to shed the pounds… and he wasn’t even trying to lose weight!

“I would never have believed before I tried it that it would have such an incredible effect,” he explains.

“I lost ten kilos in ten weeks after I was put on the diet by my doctor to reduce my cholesterol.

“It’s about targeting what you eat according to your blood group and changing your diet to fit in with this.”

The diet, developed by US naturopath Dr Peter D`Adamo, bases itself on the idea that there are certain foods we are supposed to eat depending on our blood type.

If we eat the correct foods, our bodies digest it better and absorb it more effectively.

According to Dr D’Adamo all humans started out with blood group O, the group he calls ‘hunters’. Through time however, blood group A evolved because of the excessive amounts of meat being eaten by the hunters, and the vegetarian ‘cultivators’ were born.

Next, the B-type ‘Nomads’ came along and their strong immune system meant they could eat dairy without a problem, unlike A and O types.

Finally, along came the ‘Enigma’ blood type AB, with people who could tolerate an even more varied diet.
This is why people with blood group O are the main meat-eaters of the Blood Group Diet.

According to D’Adamo, they should follow a high protein, low-carbohydrate diet. This means lots of meat, fish and olive oil with eggs, nuts, seeds and only certain vegetables in moderation.

“Those in group A are better off following a vegetarian lifestyle, avoiding dairy, and should stick to nuts, seeds, beans, cereals, pasta, rice, fruit and vegetables,” says D’Adamo.

B-types can get away with eating meat and dairy but must avoid processed foods and watch their carbohydrate intake.
Finally those with rare type AB are allowed to add dairy to their vegetarian lifestyle but can eat meat and fish occasionally too.

The diet is certainly not all about weight loss, insists David, 50, who has run the Mills and Mills group in Marbella for five years.

While most users do lose weight, he was put on the diet after a routine blood test revealed he had high blood sugar levels and cholesterol.

“They did a full screen of my blood and the nurse was surprised that my blood sugar was so high at my age, so she referred me to this diet as a way of becoming healthier,” he explains.

Because David has blood-group A, he had to give up all meat and dairy, something which he found very difficult in the first few weeks. 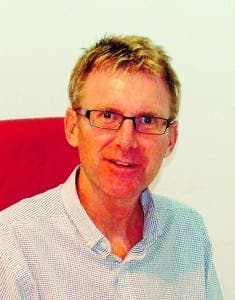 “It was a shock to the system at first because I had to go from drinking 16 cups of tea with milk a day, to drinking none at all! I now drink black coffee, which I never used to drink,” he explains.

“I didn’t used to drink a lot of alcohol anyway, so cutting that out wasn’t really a problem and you can still drink red wine with meals because it’s an anti-oxidant.

“I suppose if you’re used to eating burgers and drinking lots of beer, the diet would be a big change. The only drawback is that you do have to completely cut out certain food groups, but I didn’t really get any cravings for meat because I was very motivated to sort out my health.”

Sure enough, after just six weeks on the diet David’s blood sugar level was back to normal and his cholesterol had dropped to within a healthy range again. And that wasn’t the only benefit.

“I’ve been able to relax the diet a bit now, but I still follow it because it helped me to sleep better, gave me more energy, and helped me feel more alert and just generally a lot fitter”, he says.

“I was told to do one hour of exercise a day, but I had to eventually stop doing most of that because I was simply losing too much weight and went from a waist size 34 to a 30.

“My friends and family were getting worried that I was a shadow of my former-self!”

David and his staff were so impressed with the effects of the Blood Group Diet that nearly all of them have now adopted the plan to lose weight.

They have also set up a Blood Group Diet clinic at the medical centre, where they offer consultations with blood screenings and diet plans for 160 euros.

David says: “Some people say it’s wacky but I would definitely recommend the diet if you want to lose weight; you absolutely cannot fail!”

For more info contact David at Mills and Mills at www.millsmedical.com