WHERE the hell am I? This was my first thought as I opened my eyes, sat up in my shady pool chair, and looked around.

Once I got my bearings and fixed my disheveled hair, I remembered I had slipped out of the office into the back garden … and felt a refreshing wave of energy come over me.

Though they are about as traditional as flamenco and are even on a list of protected cultural icons, siestas are gradually fading from Spanish modern culture.

Despite most shops in Andalucia still closing between 2pm and 5pm and the streets looking eerily empty, studies show that only a fifth of Spaniards take regular siestas.

This is put down to the pressures of international business and big-city commuting.
So, should the siesta be rescued from its extinction?

I vote a wholehearted yes.

Something about the generally slow pace of Andalucian life makes it feel utterly natural to lean back in your chair, close your eyes, and drift off into dreamland after your 2.30pm lunch.

In the past, when much of the country’s economy was agricultural, a siesta gave field workers time to rest, rejuvenate, and avoid working during the heat of the day.

It is also said that in the decades after the Spanish Civil War, tough economic times required Spaniards to take two jobs or work double shifts, which meant they needed extra rest during the middle of day.

And, because the largest meal of the day for many Spaniards is lunch, a post-meal siesta goes well on an overstuffed belly.
While the concept of a siesta was born in Spain and quickly spread to Latin America, siestas are also popular in countries such as Taiwan, Serbia, Slovenia, and Bangladesh.

Every regular siesta-taker has his own preferences on when to take it, where to take it, and for how long to take it.
But, looking to history for guidance, the word ‘siesta’ comes from the Latin for ‘sixth hour,’ and is intended to occur roughly six hours after one wakes up.

In Spain, where many people do not wake up until nine, this puts an ideal siesta around three o’clock.

Doctors claim that biologically, this timing is ideal.

In the early afternoon our drive for sleep has been building for hours, but our drive for wakefulness (which keeps us wired in the evening) has not yet kicked in.

On returning to Spain, daily naps are one of the things Enrique looks forward to

With a siesta added to an already long-ish lunch, the workday schedules morph from the traditional nine-to-five grind into a nine-to-two/five-to-eight type of workday.

But, why take this nap right in the middle of the day and interrupt productivity?

According to 60-year-old Carmen Alba, who has lived in Ronda her entire life and takes siestas regularly: “It’s impossible for any normal person to work so many hours without a break. You need to recharge, just like your mobile phone.”

Enrique Bolas, a Spaniard who has lived in Ireland for 20 years, explained how frustrated and tired he gets because he can’t get a siesta – or ‘power nap’ during his working week in Dublin.

But because he misses them so much, he makes up for it by taking lengthy siestas of two to three hours on Saturdays and Sundays.
And when he returns home to Spain, daily naps are one of the things he looks forward to most.

Though fast-paced businessmen from London or New York may frown upon siestas, Spaniards and experts alike actually view these mini naps as essential in boosting afternoon productivity.

America’s National Institute of Mental Health has reported that an afternoon siesta can especially help reduce the ‘burnout’ feeling from a morning at work, and can improve an employees’ productivity for the afternoon. 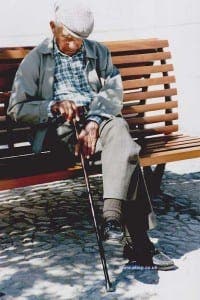 Napping can even boost your brain’s finesse – a NASA study found that naps were almost as helpful as a full night of sleep for individuals attempting to perform memory tasks.

A short nap can even be better than a cup of tea or coffee for giving you energy.

Researchers from Loughborough Univeristy in Britain tested three popular methods for combating afternoon exhaustion – a 20-minute nap, a cup of coffee, or 90 minutes of extra sleep in the morning.

They found that a siesta boosted alertness significantly more than the other techniques, and that an extra lie-in – perhaps surprisingly – was the worst option for increasing overall energy.

Sometimes, however, the slow-paced day and midday nap have led Spaniards to be viewed as lazy.
In reality, following their lead may even be good for your health.

An extensive six-year study of 23,681 healthy male and female subjects between the ages of 20 and 86 in Greece found that those who took a 30-minute siesta at least three times a week had a 37 per cent lower risk of heart attack than those who do not.

Researchers said this is because siestas help people de-stress, which can lessen their reliance on unhealthy behaviours such as smoking, eating a poor diet, drinking too much alcohol and not getting enough exercise.

But not everyone is such a fan of siestas, including the Spanish government.

In 2006, a new rule forced all central government workers to take just one hour for their lunch break, as opposed to the traditional two or three hours. The upside was that they could finish work by six o’clock.

The change sought to align the Spanish work schedule with the rest of Europe and prevent workers from being in the office – and away from their families – until late in the evening.

People pushing for this change also insisted that Spaniards would get more sleep if the workday were more consolidated.

After hearing from both sides – the nappers and the anti-nappers – I decided I’d have to try it out for myself.

So around 2:30 after being awake for six hours and working in a un-air conditioned Andalucian office, I shut my laptop and ate my tuna sandwich and nectarine.

I found a nice shady lounge chair for my siesta and used my sweater as a makeshift pillow.

Careful to heed the expert warnings about overdoing your siesta (and also abiding by boss’ orders), I set an alarm for 3:00 and got comfortable in my secluded nap spot.

It took me about ten minutes to fall asleep thanks to a fly and a couple of mosquitoes, not to mention a nearby cock crowing. Perhaps I should have set my alarm for later, I thought.

But soon enough, a nice light breeze and dreams of how good I’d feel afterwards lulled me into what I assume was the ideal-for-napping stage one sleep.

When my watch alarm started beeping, I opened my eyes in that way you do on the weekends when you sleep until you naturally wake up.
It felt nothing like that horrible feeling when my alarm goes off during the week.

Where was I? Oh, right. Just near my office taking a lovely outdoor siesta.

I was refreshed – it wasn’t difficult at all to wake up since I had followed timing instructions carefully – and I actually felt ready for an afternoon of work despite my momentary disorientation.

I began to see why people in the UK and US had started calling these things ‘power naps.’

Walking back to my desk with a spring in my step, I realised the experts had it right.

We shouldn’t feel guilty about instituting midday naps, and in my opinion, Spaniards should protect this aspect of their national cultural heritage with all their might.

In the end, the scientists are right: taking a nap is more a biological need than just an age-old custom.

Now, if you’ll excuse me, I’m going to go and conduct some research on the effects of having two siestas a day.