PICK any sport these days and it is likely that a Spanish name will be surging forward in the top three, if not as the winner.

Whether it’s the football or basketball teams, the individual stars, such as Rafa Nadal and Alberto Contador, or the speed fiends on motorbikes or in cars, they are all going great guns.

The question is how do they do it? And have they always been this good?

The simple answer is no.

For a long time the rest of the world thought of Spaniards as being more likely to spend 90 minutes taking a siesta than running around a football pitch.

This was, of course, reflected in their achievements over the last half century and when they won the European championships in 2008, incredibly it was the first time for 44 years that the football team had won a major trophy.

Coming hot on the heels of the successes of cycling genius Carlos Sastre and tennis ace Rafael Nadal in the same year, it marked the beginnings of a meteoric rise to becoming a sport superpower.

Since then Spain has definitely awoken as a sporting nation and has become, without a doubt, the envy of the rest of Europe.

This year, more than ever before, everything Spain’s sportsmen (and women) touch seems to turn to gold.

First it was ‘Los Rojos’ winning the World Cup and in so doing becoming only the third nation to be world and European
champions simultaneously. 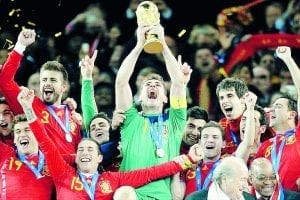 Then there was Rafael Nadal (again) winning at Wimbledon, Alberto Contador taking home the yellow jersey at the Tour de France, Fernando Alonso coming in pole position at the German Grand Prix, Jorge Lorenzo winning at the US MotoGP and Spain taking the crown at the European Basketball championships. Is there nothing they cannot win? And what has changed?

Many Spanish commentators believe it is all about mentality, particularly when it comes to the football team.

Indeed, it is often said that battles are won in the mind before anywhere else. As boxer Muhammad Ali once said: “Champions aren’t made in the gyms. Champions are made from something they have deep inside them — a desire, a dream, a vision.”

Former Spain and Real Madrid defender Fernando Hierro certainly believes that a change in mentality was the reason behind his country’s sudden improvement.

“What has changed is the mentality,” he explains. “After 44 years, Spain are now the European champions and it was this sense of belief that helped them to go on to win the finals at the World Cup.”

Newspaper La Razon agreed that ‘mental attitude’ was important, but also insisted that talent and training played a
huge part in the success of the football team.

A similar improvement has been seen in the country’s athletes, since a huge amount of investment was made with the arrival of the 1992 Olympics.

Prior to this Spain had only ever won four gold medals at the Olympics but in 1992 they won an incredible 22 medals in total, and since then have gone on to prosper.

The bottom line is that the Olympics involved a massive surge in investment into the sports. And ever since then the number and quality of training facilities in Spain has greatly increased.

The current generation of athletes – and all sportsmen for that matter – has grown up in an increasingly prosperous country with access to fantastic sporting facilities.

This line of reasoning is supported by world famous tennis coach Jose Higueras, who believes it is the recent prominence of clay court tennis (substantial amounts of money have been invested in installing new courts) for junior players that is the key to their success.

He explains: “Certain core attributes are best developed on clay and then augmented through experience on faster surfaces.”

Certainly, world number one Rafael Nadal is now known for his prominence on a clay court and his impressive record now includes three of the four Grand Slam tournaments, the Olympic singles gold in Beijing two years ago, and helping Spain to Davis Cup victories in 2004, 2008 and 2009.

So with regular competition from an early age, expert technical tuition, and now the right type of courts, it is little wonder that the Spaniards can currently boast 15 of the world’s 100 top tennis players.

But, while training facilities have certainly had a massive affect on the achievements of its sportsmen, there may perhaps be another reason.

Defending Tour de France champion Alberto Contador, who has just won his third title in four years (it was previously
held by Spaniard Carlos Sastre), believes the respectful way Spanish athletes are treated is the reason behind their success in sports.

He explains: “It’s down to the culture of the country. Sport is very representative of the nation abroad and in Spain the sportsmen are really valued and appreciated so that might help explain Spain’s success in football, Formula One, cycling, tennis and other sports.” 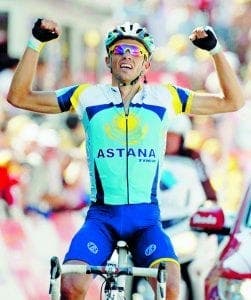 The president of Spain’s Olympic Committee, Alejandro Blanco, also agrees that changes in the way sport is supported in Spain have had a lot to do with the improvement in results.

“Of course the medal is solely for the sportsman for his effort and dedication” he says.

“But it also owes something to the magnificent work of so many coaches. The era when these people were just solitary figures working alone against the odds has long been left behind.”

That era apparently came to an end with the death of Franco in 1975.

Indeed, since then the country has grown in both prosperity and confidence.

According to Juan Jose Mateo, a sportswriter for respected Spanish daily El Pais, democracy and integration into Europe has brought about big changes in the world of sport.

Much of it, he argues, is to do with diets and medical care.

“The first generation of Spaniards born into a democracy is on average nine centimetres taller than those born in the first years of the dictatorship” he claims.

It has been scientifically proven that a lack of nutrition is one of the main reasons for growth deficiency problems among children and so it follows that an improvement in diet, which has happened in Spain since democracy, has made a substantial difference to physical ability.

Moreover, the Mediterranean diet, prevalent in southern European countries such as Spain, has for a long time been recognised as incredibly healthy.

Combining this diet with a warm climate can only have had a positive impact on the athletes that have grown up here.

So with all of the factors that have influenced Spanish sport over the last 20 years how do you determine which has had the greatest impact?

There is strong argument to suggest that the country is simply reaping the reward of years of investment and patience.

On the flip side there is an equally compelling case that they are simply over-brimming with natural talent that stems from their culture, their diet, the weather and the fact they just love sport so much.

And of course, timing is everything. Spain has undergone an extraordinary transformation since Franco died and the success
of this year may well be the culmination of a process that has been building for the last 20 years, with everything finally coming together at just the right moment.

Of course, this doesn’t stop the sceptics out there suggesting that the Spanish were simply lucky to be backed by Paul the Octopus and it was all a big coincidence.

But somehow, the facts seem to suggest that their reign as a European sporting superpower may not quite be over.

And in the words of Frank Howard Clark, “It’s hard to detect good luck – it looks so much like something you’ve earned.”