IT’S often said to be worth its weight in gold.

And the arrival of autumn means only one thing for many of the inhabitants of Castilla-La-Mancha – time to harvest its ever precious saffron.

This month the historic town of Consuegra is holding its annual Saffron Rose Festival.

Organised to coincide with the harvest, the festival celebrates all things Manchego.

Visitors can enjoy the competition in which nimble-fingered locals separate the saffron spice from the flower or take a trip to the Molienda de Paz to watch wheat flour being made at the old Sancho windmill.

But the star of the show is of course the purple saffron flower.

With the searing summer heat having passed, villagers will flock to nearby fields and begin the arduous task of plucking purple crocus heads.

These blooms contain striking red stigmas that, when dried, become the much sought after saffron – the world’s most expensive spice.

Only after having gathered about 14,000 stigmas will there be enough to make just 28g of the spice.

Spain is now the second largest saffron producer in the world, after Iran

You actually need 250,000 flowers to produce just one kilo of dry saffron.

But with the price to the farmer standing at 1200 euro a kilo, and it selling for just over a euro a gram in the market place, it is worth the 40 hours of manual labour that it takes to produce a kilo of the prized spice.

So delicate are the stigmas that the production of saffron is now one of the few food processes that are still completely non-mechanised.

The whole chain from harvesting and drying, right up to packaging, is totally done by hand for fear of damaging the delicate stigmas.

Nevertheless, time is still of the essence as – for every hour that passes – the intensity of the colour and the flavour diminishes as well as the value of the spice.

Whole villages therefore fight the back-breaking conditions to collect as much saffron as possible during the three week harvest period.

Once in bloom the flowers are picked – always before sunrise – to reduce any potential damage to the stigma as the petals are still closed.

Working against the clock, the stigmas are immediately cut out and dried in baskets above a heat source.

Thanks to specialist knowledge handed down over generations, the Castilla-La-Mancha harvesters are highly adept at ensuring their export loses minimal value during the production journey.

Nowadays there are about 400 saffron farmers, known as azafranaleros within the region, although this is a fraction of what it once was. 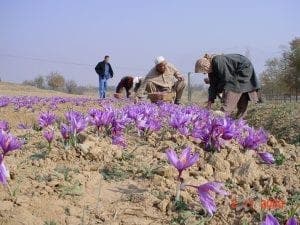 Just 30 years ago, villagers contrived to pluck, cut and dry enough stigmas to produce a mind-boggling 50 tonnes of saffron annually.

And in fact, around 70 per cent of the world’s saffron used to come from Spain.

A decade ago, this had slumped to just 100kg as saffron made in the Middle East engulfed the market, and left Spanish growers unable to compete.

Whisper it quietly however, but there have been hints of a revival for the La Mancha saffron.

And Spain is actually now the second largest saffron producer in the world, after Iran.

Demand is on the up among Spaniards for their own domestic saffron once again, and well-respected chefs are putting speciality dishes containing the spice back to the top of their menus.

Spanish food lovers argue that their azafran (saffron from the plains of Castilla-La-Mancha) is unrivalled across the world. They have even nicknamed it ‘oro’, gold.

The most famous dish containing saffron is of course paella, but many other dishes including fish stews, soups and meat stews, known as fabada’s, made from white beans, pork, and spicy sausage also have their own dashes of saffron.

Alongside Manchego cheese and Don Quixote, Castilla-La-Mancha can rightfully hail its saffron to be one of its most famous exports once more.

Shocking photos of cars trapped in SNOW in Spain