THE anonymous metal door swings open and you are led up a narrow corridor to what must easily be one of the most interesting Roman finds in Spain.

Only discovered when a local man decided to build a basement garage to his home in 1997, the section of Roman road still features its guttering, sewers, pavement and giant stone flagstones.

In peak condition and showing clearly what an ingenious race the Romans were, you will even find the remains of a children’s game etched into one of the giant paving stones.

The section of road is all part of the incredible collection of Roman remains that makes Medina Sidonia a fabulous place to explore.

Just around the corner is the latest offering; a wonderful museum allowing visitors to take a walk around part of the advanced sewerage network that the ancient race installed in the town.

It is particularly poignant to think that over 2,000 years ago the Romans understood the importance of sewage, when today a large percentage of Andalucia’s towns still dump raw sewage into rivers.

The ‘Cloacas Romanas’ site dates from the first century AD and shows a clear understanding of municipal planning. The extraordinary system of two-metre high barrel-vaulted tunnels are solid and extensive and are said to run throughout the Gaditano town.

First discovered in 1963, they show clearly how the sewage was carried off via a main channel with smaller rills running off it.

Children will love running up and down the tunnels, and the adjacent museum features a series of games and exhibits for them too.

But Medina Sidonia – like its nearby neighbours of Benalup and Alcala de los Gazules – is completely awash with history.

As well as a hilltop fortress, a beautiful church, that once served as a cathedral, the town is full of historic buildings with pretty old wooden doorways and classic metal rejas (or window bars).

Looking like a white wedding cake from a distance, the fortified town became one of Spain’s most important ducal seats after it was seized from the Moors in 1264. 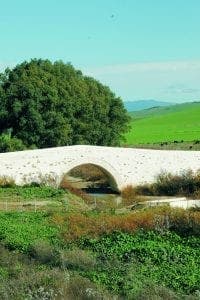 The title of ‘Duque de Medina Sidonia’ was bestowed upon the family of Guzman el Bueno, the knight who valiently fought to take back various Cadiz towns from the Moors, including Tarifa.

It is also the same family, who later, less valiently provided the admiral that would oversee the loss of the Spanish Armada to the British.

The title is still in the same family and there is a very distinct aristocratic air about the place.

Its tidy cobbled streets are ordered and clean and there is a true sense of grandeur about its buildings.

Take the wonderful Plaza de Espana at the top of the town. It is one of the most lovely plazas in Cadiz province and is well planned with fine 17th and 18th century townhouses flanking it.

Always a hive of activity, the Renaissance fronted fascade of the town hall is of particular interest, while two or three of the cafes and a cake shop are worth a look into if looking for refreshment.

From here, take a walk up a narrow alley to the Plaza Iglesia Mayor where you will find one of Andalucia’s true religious gems.

Santa Maria la Coronada is only a church, but it has true pretentions of being a cathedral. So it is fitting to discover that it was here that the Archbishop and his staff from Cadiz frequently fled to avoid the frequent attacks of the British and Portuguese.

Similar to the beautiful churches in Ronda or Priego de Cordoba, the place of worship, built on top of an earlier mosque, is a fine example of late 15th century Gothic architecture.

You enter the church through a rather nondescript patio, partly Mudejar in influence, and have a superb Baroque tower, which can be climbed for some remarkable views across the nearby fields.

The original bells are still at the top and the view, in particular, over towards the Costa de la Luz and Cadiz city 20 minutes away is fascinating.

Look out for the benches used in the Spanish Inquisition

Inside the main church take a particularly look out for two benches that were used during the Spanish Inquisition, as well as the fine Plateresque retablo carved out of polychromed wood.

Head out of here for a general stroll, looking out in particular for the lovely Medieval archways that still exist.

The most evocative is without a doubt the Arco de la Pastora, which was built under the Arabs in the 10th century and is of the classic horseshoe arch shape, its marble pillars probably Phoenician in origin.

With so much history it is fitting that the town has a series of sweets that have been produced here since Arabic times.

“The best known of these is the alfajor,” says Jose Manuel Gomez, of local company Distinctivos de Calidad, that supplies the area’s specialities to over 50 restaurants around Andalucia.

“It is a type of macaroon made with almonds, eggs and honey and it is known around Spain,” he adds.

“But there is so much of quality around here, much of it due to the incredible nearby grazing land.”

To help market the local products, he and a number of other producers have recently launched a new brand ‘Aromas de Medina’.

“It is slowly getting the name around and so people understand the idea of quality,” he explains at his shop, which also sells foie gras, high quality ham and cheese from around the province.

The town of 12,000 people is a great place to live, as Dutchman Joost Van der Laan confirms.

The former Dutch television boss moved to the town from Malaga eight years ago.

“The people are so friendly. and i love the beautiful countryside and stunning views. And best of all the unspoilt beaches of the Costa de la Luz are just 30 minutes away.”

Now well integrated into the town, he has made friends with a number of older Spanish residents, including a 72-year-old who walks from Puerto Real every Saturday to join him for lunch. The trip is 33km and takes him seven hours.

Kirsty Mckenzie - 14 Apr, 2021 @ 18:30
THE BARCELO hotel group is gearing up for a busy summer in Spain after taking over management at two four-star hotels on the Costa del...

Spain revealed as one of the costliest places to run electric cars, but UK only slightly cheaper

With racial and homophobic attacks on the rise, new study reveals those most likely to commit hate crimes