MARBELLA town hall has come up with a cunning plan to pay off its social security debt.

Finca La Caridad, valued at 15 million euros, was taken from Roca, who is currently at the centre of the high-profile Malaya corruption case.

It formed part of a 24 million euro payment imposed by the courts in return for the money stolen from the municipal coffers.

Now, the Town Hall has reached a tentative agreement with the Social Security Treasury to use it as payment of a debt it has with the agency.

The mayor of Marbella, Ángeles Muñoz, travelled to Madrid to discuss the proposal with chief executive, Francisco Javier Aibar and managed to strike the deal.

The Marbella municipality currently has a debt of 182 million euros with the agency, and a further 85 million euros of debt with the finance department. 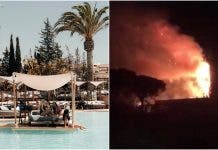