AS I dipped my toe into the water and admired the stunning mountainous scenery around me, the charms of the Genal Valley were all too apparent.

From my vantage point in the municipal swimming pool in Parauta, I was surrounded by a vast landscape of oak and chestnut forests and craggy peaks.

This expansive valley – spread over 42,000 hectares between the coast and Ronda – is a paradise for walkers, wildlife lovers and those who just want to get away from it all.

It even boasts one of Europe’s cleanest rivers.

Certainly there are few regions as evocative and unspoilt as the Genal Valley, which is made up of a collection of 16 villages within the Serrania de Ronda, some of which are literally off the map.

Moreover, while Gaucin, by far the biggest town in the valley, may have attracted an influx of expats in recent years, few have ventured further into the valley.

It remains quintessentially Spanish and for every few cars, there seems to be a donkey. 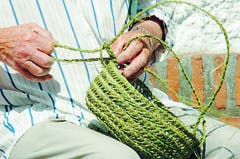 In fact taking a trip through the valley is almost like taking a step back in time.

“Life here goes on the same,” smiled Ana Martinez who runs El Quejigo in Algotocin, selling local hams and cheeses in addition to typical artisanal crafts from the area.

“There are less people these days, it is quieter but it hasn’t really changed much over the years.”

Certainly tourism is not generally developed in the Genal Valley giving those that venture into each authentic village the sense of getting to know the ‘real Spain’ or at least, how it used to be when people lived simpler and slower paced lives.

Going hand in hand with this, the Genal Valley is one of few areas where you can still glimpse artisanal trades that are slowly dying out.

In particular you will find baskets and blinds woven out of esparto grass that is found on the high peaks.

Indeed esparto was once the main source of income for many families in the Sierra de las Nieves.

Dividing the manual task between men and women – the men would collect the grass and the women would weave it – the locals were able to make countless everyday items.

In Igualeja there is now a woman’s cooperative that has been formed to keep this tradition alive.

But the sad truth is that it is dying out.

“A few decades ago esparto was a good living, but nowadays young people are not interested in learning the trade,” explained Martinez, who sells the products.

“It is a lot of work and takes a long time and people just don’t have the patience.” In fact the main staple business here is actually chestnuts.

Indeed, as I ventured into a bar just outside Gaucin I was immediately struck by two posters – one in English, one in Spanish – hanging pride of place between the hams and wooden beams informing me all about chestnuts.

Apparently they can be eaten as a dessert, in syrup or as butter.

But what is more interesting is what it says about the area, which incidentally boasts four different varieties of chestnut trees, some up to 500 years old. 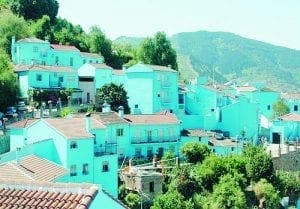 Each local village picks them and sells them to a local cooperative that markets them around the rest of Spain.

If you visit in late Autumn – well worthwhile just to see the valley taking on the red hues of the leaves of the valley’s chestnut trees – you are sure to find many families in the different villages out picking chestnuts, just as their parents and grandparents did. They could also be gathering wild the mushrooms which are found in abundance in the shade of the trees.

There is a certain charm to the rural way of life here, with people living off the land.

And a great way to get a feel for the area as a whole is to take a drive along the incredible A369 between Gaucin and Ronda.

The stunning road weaves its way through the valley, offering breathtaking mountain views along the way.

But while the drive itself is stunning, it is the villages along the way that bring it to life.

Often outwardly similar, every village has a unique character.

This is most apparent in the tiny village of Juzcar, which decided to break the mould by painting its white walls blue.

The village certainly stood out from the crowd after being transformed to promote new film The Smurfs 3D.

Despite competition from 200 other villages, it was chosen for its close resemblance to the fictional village where the Smurfs live.

Now where else could you say that?