THE Olive Press has discovered a number of other complaints against lawyers have been ignored by the Malaga Law Society.

One Marbella legal company Lawbird confirmed that it had made several complaints to the self-regulatory body about malpractice that have gone unheard.

One of these involves a commoner passing herself off as a lawyer.

Another property buyer is now being forced to take separate legal action, after the body failed to reprimand a lawyer who overcharged him 34,000 euros.

“It is a clear cut case,” the British businessman told the Olive Press. “The lawyer in question kept promising to give me the money back, but it never came.

“I can’t believe that the society feels there is no case to answer.”

It has also emerged that one of the employees of the embattled society is himself linked to a dubious legal practice investigated by police.

“What chance is there of getting justice here in Andalucia when these sorts of people work in the so-called regulatory body,” asked Antonio Flores, from Lawbird.

“The law society is certainly acting in a strange way and is not at all transparent.

“They have a very lax way of dealing with things.”

Here, the Olive Press shines a light on the three cases:

A complaint made to the Malaga Law Society by a British businessman after he was overcharged a staggering 34,000 euros by his lawyer has fallen on deaf ears.
According to the expat, the body insisted the lawyer was using his ‘knowledge and expertise’ and that they would take no action.
“It is ridiculous. It is cut and dried. I went to the trouble of documenting everything, translating it in to Spanish and then sending it recorded delivery to the law society and they just said no.”
“What is the point in having the society if it doesn’t deal with these matters?”

Despite complaints from law firms, one high-profile woman is passing herself off as a registered lawyer and yet she has no qualifications.
Advertising in various rival newspapers, she even speaks at legal seminars for expats.
“We have reported her several times but no-one at the Law Society seems to take any interest,” insisted one lawyer.
“We cannot afford to have a regulating body which allows fraudsters to run bogus law firms,” he added. “It’s very detrimental to the image of the profession.” 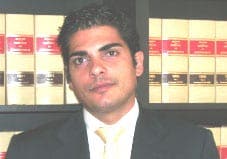 In an ironic twist, a lawyer working for the Malaga Law Society to keep check on the profession has been linked to an alleged fraudster.
Tovar Oliver Hernandez Riverol (above) works in the department that deals with good legal practices and imposters.
Yet, he is mentioned in a police report as having connections to law firm Ramirez & Ramirez, which has been investigated for defrauding victims in the timeshare arena.
Arrested four times, its boss Fabian Marcelo Ramirez was accused of falsely promising his victims to recover money in boiler room, timeshare and cashback scams in exchange for an upfront fee.
“Ramirez backed up his activities using a number of lawyers, including Hernandez,” explained Antonio Flores of law firm Lawbird.
While there is no suggestion Hernandez was conning the victims himself, as Flores adds: “Surely the Law Society must know that a man supposedly protecting the purity of the profession should not have these kinds of connections. Why have they not done anything?”

Lawyers in the dock in Spain