PHOTOS of women posing sexily as nuns have caused outrage among religious groups in Spain.

Obscenity, an exhibition of 50 provocative images, includes Spanish actress Rossy de Palma  in a black and white habit and see-through corset with a rosary between her teeth.

Other images include Alaska, a well known singer in Spain, dressed as a sexy saint in black with a communion wafer on her tongue.

The controversial show, at the Fresh Gallery in Madrid, has led to calls from Catholic groups including the Eucharistic Ministry for demonstrations ‘against blasphemy’.

The organisation said the protest would be held ‘in defence of our Christian roots and the Catholic faith’.

The Francisco Franco Foundation, a group created to preserve the memory of the former dictator, called the exhibition ‘a virulent and morbid attack on the Catholic religion’.

“The lives of the saints are full of ecstatic acts of sublimated sexuality,” he said.

“Obscenity presents a series of portraits that illustrate this most holy convergence of the sacred and the profane.” 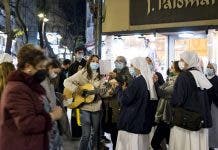 Legendary Spanish artist Pablo Picasso’s work going on sale in London for as little as €6,300