IT has been heralded as the starting point for democracy in Spain.

And it was signed right here in Andalucia, exactly 200 years ago this month.

The Spanish Constitution was set up in Cadiz in 1812 and appropriately the city is celebrating its key anniversary this month.

More commonly known as La Pepa, it was signed on March 19, or Saint Jose’s Day, which gave it the name, as Pepe is a common nickname for Jose (and la constitution is feminine).

It has also gone down as one of the most liberal constitutions of its time.

It was the first and most extensive of Spain’s constitutions (between 1812 and 1978 Spain actually had eight different constitutions) and established the principles of universal suffrage, national sovereignty and freedom of the press.

“It was legendary even though it was only in effect for a few years,” says Emilio La Parra, professor of contemporary history at Alicante University.

“It set two precedents that formed the basis of the liberal political system: national sovereignty and the division of powers.

“It cannot be said that it was the beginning of democracy because it did not recognise everybody’s political rights: particularly women’s, nor indigenous peoples or slaves; but it is one of our most important legal texts of reference.”

The constitution was produced by the Cadiz Cortes against the backdrop of the Peninsular War when Spain was resisting the siege of Napoleon’s French troops.

While Spain was in the grip of the French colonial power, a provisional government was set up in the south to act in the absence of the legitimate king, Fernando VII.

But those who gathered in Cadiz were more free-thinking than the collective Spanish elite, and their document was far more liberal than the one which might have been produced had it not been for the war.

In particular, it was the first constitution in Europe to deal with national sovereignty – recognising sovereignty as coming from the people and not from the king.

It also reduced the power of the crown, the Catholic Church and nobility.

And it served as a model for many other European constitutions in the years that followed.

Moreover, unlike the French Constitution, which only applied to all French-speaking citizens of France, the Spanish Constitution had a more universal character.

Some 70 of the more than 300 lawmakers present to sign the constitution travelled from the Americas to take part.

And the constitution helped drive the independence movements in a number of countries in the Americas.

It is in recognition of this that Cadiz has been designated as the 2012 Capital of Ibero-American Culture.

“Cadiz became a political school that influenced the Americas and Europe,” explains Cadiz University professor Alberto Ramos. “It became a role model of a country fighting for independence against an invading army yet still capable of conducting a political revolution.

“Attaining happiness was one of the utopian goals of the Enlightenment,” he added. 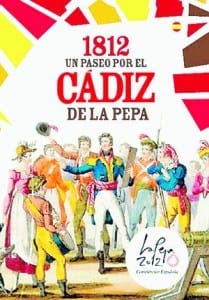 However it was short-lived.

Napoleon’s defeat and the restoration of Fernando VII to the throne put an end to the Constitution.

Fernando refused to recognise the document, and issued a decree in 1814 dissolving the Cortes and abolishing all legislation passed in his absence.

An absolutist monarchy returned to Spain.

But this was not the end of La Pepa.

Indeed over the following years ‘Viva la Pepa’ became a cry for the return to a liberal regime.

And just six years later, in 1820, a military uprising led to the constitution being proclaimed for a second time in a three-year period.

The King then revoked it again after French troops invaded in 1823 to restore Fernando to absolute power.

Incredibly though, La Pepa was able to make a third comeback in 1836, when it was restored by the Queen Maria Cristina de Borbon, following her husband’s death in 1833.

It was eventually succeeded by a new constitution in 1837, the second in Spain’s history, but it has not been forgotten.

Now as it celebrates its bicentenary, Cadiz has launched a rich calendar of cultural, social and political events honouring the spirit of La Pepa.

On January 6, Cadiz staged a special drawing of the National Lottery known as El Niño, marking the first time in its history it was held outside Madrid.

This was fitting as the lottery was itself created 200 years ago by the Cortes of Cadiz to boost revenues for the Treasury.

On March 19, King Juan Carlos and Queen Sofia are due to arrive in Cadiz to celebrate the anniversary.

Two new infrastructure works are also set to get underway as a result of the commemoration: the second access bridge to Cadiz, and the arrival of the AVE high-speed train.

So while carnival may be over and the costumes are hung up for another year, Cadiz still has plenty of reasons to celebrate.