ONE of my first experiences of hiking in Andalucia was an encounter with a full-size 600-kilos toro bravo or fighting bull.

My partner and I had lost the route and, endeavouring to find it again, we set out across a huge stretch of fenced countryside ignoring – as we climbed over – signs stating: “Danger: Fighting bulls.”

I’d seen these signs many times with ne’er a steer in sight, and believed that farmers often put them up to frighten away potential trespassers.

We had soon reached the far side of the field and, feeling peckish, sat down beside a shady track with our backs against an accommodating stone.

This was as good place as any to eat the picnic we’d brought with us and we were soon tucking into cold tortilla washed down with rustic red wine out of plastic cups.

It was then I became aware of a steady ‘clump, clump’ of hooves coming down the track behind us.

Gingerly, I slid up the rock and peeked over the top.

To my horror, a great black toro bravo with horns the size of elephant tusks was heading towards us. Dropping back behind the rock I held my partner firmly and hissed ‘Freeze!’

If we made a run for it we could both end up badly injured, if not worse, so we stayed rigidly still holding our breath as the ‘clump, clump’ got louder.

The beast passed literally within two metres from where we were crouched, trembling with fear.

I sneaked another look over the rock to see his enormous black rump with swinging tail moving away. 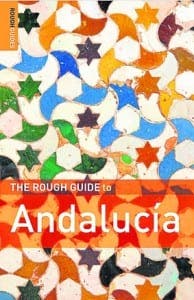 But then he stopped, sniffing the air as his head shifted towards us.

He must have caught our scent on the downwind, and we both eyed the branches of a nearby tree praying for a potential avenue of escape.

But just as we were about to make a run for it, he turned away and continued down the track, leaving me feeling more relieved than ever before.

We beat a hasty retreat to safety and the event has now provided my partner with an oft-repeated dinner story about a so-called expert travel writer (that’s me folks!) who nearly got her killed by ignoring bull warnings on fences.

If you can keep clear of bulls (and the fence signs often mean what they say!) there’s plenty of fine walking to be had in Andalucia’s magnificent natural parks.

First set up in the 1980s by the new Junta regional government, they now number 26.

They feature an enormous range of geology, climate and habitat including coastal dunes, beaches and semi-desert steppe as well as mountain forests, Mediterranean woodland, salt marshes and marine zones.

To explore them properly you’ll need a decent map and possibly a hiking guidebook.

Below are a few of my own favourite parks to give you the perfect excuse to get out those hiking boots and head for the hills.

1 Sierra de Aracena
In springtime this is a real Garden of Eden with a profusion of wild flowers including French lavender, peonies and Spanish irises. Charming villages for overnighting include Fuenteheridos and Almonaster and you must not miss the region’s famous jamon de Jabugo.

2 Sierra de Cazorla
Arguably Andalucia’s most spectacular park, the Sierra de Cazorla is the largest protected area in Spain. Stunning waterfalls cascade from towering rock cliffs that are home to the acrobatic ibex, while the valleys and gorges provide a habitat for unique pre-Ice Age plants, mouflon and otters. An astonishing variety of birdlife includes the recently reintroduced Lammergeir, or bearded vulture.

3 Cabo de Gata
Due to its coastal location flamingos are a common sight in season and there are many fine beaches on which to spread your towel after a day’s hiking. The pretty, low-key resort-village of San Jose provides an ideal base.

4 Sierra de Grazalema
A range of craggy limestone peaks swathed in forests of oak and the rare pinsapo Spanish fir and a wealth of plant species – orchids are a speciality here – make it a surefire winner. The pueblos blancos (white villages), including Zahara, Villaluenga and Benaocaz, make excellent bases for sorties into the park.

5 Sierras Subbeticas
This rugged, rambling spur of the Cordillera Betica mountain range has jagged, karstic limestone formations are punctuated by gentle wooded valleys. There are golden eagles and peregrine falcons and delightful white villages like Zuheros, Carcabuey and Iznajar. A redundant rail line has now been turned into a stunning 60km path named the Via Verde (Green Route; www.viasverdes.com).

The seventh edition of the Rough Guide to Andalucia is published this month.

Life is Easy with Eyes Closed… (But opened for John Lennon in Spain’s Cabo de Gata!)

REVEALED: The most popular and iconic Spanish location for movies