THE Earl and Countess of Wessex’s visit was by no means rocky.

The trip to Gibraltar could not have gone smoother, especially with the wave of recent tensions between Spain and Gibraltar.

Support for the Earl and Countess definitely didn’t die down on the second day of their visit.

Huge crowds turned out again to patronage the Royal couple.

As they waved their flags in the air, the public seemed to be waving goodbye to the troubled waters. 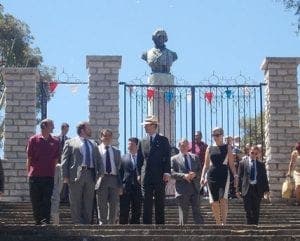 The day commenced with a stopover in the Alameda Gardens to unveil a plaque on the fountains.

The beautiful gardens provided a picturesque backdrop for the Countess of Wessex who seemed in her element when greeted with the chant ‘Sophie’ by the toddlers from the local nursery.

It was reminiscent of the late Lady Diana when she crouched down and seemed genuinely captivated by their words, apparently losing herself in a child’s world for a good 10 minutes.

The royal couple inaugurated a plaque in remembrance of the Moroccans who worked in Gibraltar during the closure of the Spanish border.

There were members of the Moroccan community association, representatives of G.G.C.A. and G.T.A, and former trade union leader Jose Netto, amongst others.

Fabian Picardo commemorated the Moroccan workers in his speech and thanked the royal couple for inaugurating the plaque.

The Prince, in a light-hearted manner which he so naturally adopts, joked with the spectators that the ‘plaque is not too bad is it,’ to which the crowd responded with a hearty laugh. 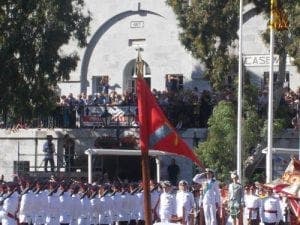 The patriotic fervour continued on into the evening, and culminated in the Royal Parade at Casemates Square; an explosive celebration of this momentous occasion.

The parade was attended by 750 guests, and close to one thousand members of the public.

The Royal Gibraltar Regiment was present and the Prince inspected the guard, honouring the royal tradition.

The 21 gun salute and stream of aircraft certainly caused a stir with onlookers, some of whom lost their hats to the wind during the event, to the public’s bemusement.

In light of recent conflicts, this visit has been very uplifting for the morale of Gibraltar and its people.

The Gibraltarians have reaffirmed their support of the royal family and enthusiastically waved their flags, in unison, to demonstrate they are British and one with the Queen.

Elena Gocmen Rueda - 24 Jan, 2022 @ 17:45
POLICE on the Rock are appealing for anyone who witnessed a blaze that damaged cars parked on Witham’s Road to come forward. One car was...