IN the early 1960s, a local politician hit on the idea of attracting new residents – wealthy ones would be nice – to boost the economy of the then dirt poor village of Mojacar.

No doubt spurred on by events to the west in Torremolinos and Marbella, the offer was simple enough: we’ll give you a ruined house or a chunk of land if you are prepared to invest locally.

Several people took the bait and the sleepy spot found itself with some new, and much needed, blood.

The first arrivals were mostly artists, who founded an art movement named after the local totem the Indalo, calling themselves the ‘Indalianos’.

But by the end of this project, around 1965, many well known characters had joined the fray; including famous bullfighter Antonio Bienvenida, diplomat Sir Michael Adeane, actor Charles Baxter and concert pianist Enrique Arias.

It was into this exciting mix that my parents arrived in the town in 1966, when they bought themselves a two-storey house for the equivalent of just €540.

Then, a callow 13-year-old, bobbing backwards and forwards from my boarding school in the UK, I soon began to realise where my future lay.

Weighed down with the tradition and rigidity of public school life or enjoying the excitement in the refreshing region of Almeria?

Of course, I chose the latter, fleeing school with just a handful of O-levels and joining my mother and father, who – worried by the lack of late evening activities – had built a bar (La Sarten: which is still with us today). Other oddballs had soon set up shop; mainly a succession of serial drinkers thanks to the three-cent-a-glass brandy available in those days.

But there was also glamour – and a small, but internationally renowned bohemian colony sprung up – much helped by the decision of the tourist board to build a state-run Parador in the town.

I remember clamouring to watch film stars hang out on the beach – such as Robert Shaw, Anita Ekburg and director Mike Lester and his film-star son Mark, the young Oliver in the famous musical.

There was also what turned out to be the appropriately named Dennis Hopper, who was kicked up the backside by my father in a rare bar-room brawl somewhere in the village. 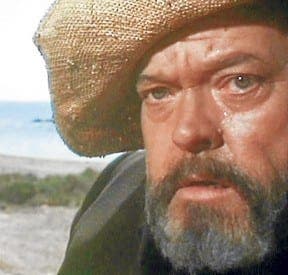 Then there was the other time that my father played ‘checkers’ with Orson Welles. The story goes that the famous actor/director enjoyed a game of draughts. His version, honed on the nearby beaches between takes of his film Treasure Island, involved playing with 12 small glasses of liquor each, one player choosing brandy while the other went with anis. You ‘took’ a piece, you drank it. The player who could still see the board at the end of a game being declared the winner. My dad reckoned he had won hands down.

It was just as the region became famous for it’s film industry.

Indeed, Spaghetti Western films came from the area and were at their zenith then, when various purpose-built cowboy towns sprung up, several of which are still standing.

Clint Eastwood, Charles Bronson, Lee van Cleef and director Sergio Leone frequently spent time in Mojacar, when staying at the nearby Gran Hotel in Almeria, or out on set in Tabernas.

Us expats were often cast as extras to help water down the number of gypsy ‘bandidos’ in these cheap and cheerful productions.

It all makes perfect sense then, that Mojacar these days is known for its magic: but whether it comes from the witches that used to plague the town with their love philtres or the heavy scent of jasmine in the narrow whitewashed streets is up for debate.

Or could it be to do with the light? While there’s not much to interfere between the top of the town and the sky high above, Mojacar has its own microclimate. With acceptable average seasonal temperatures and lots of sunny days, it’s never too hot or too cold.

Either way, the town and its 17 kilometres of fabulous beaches are the final steps in a tumble of hills that began their descent in the high Sierra Nevada mountains in Granada.

Cubist in appearance, the town sits perched on an uncomfortable-looking hill, almost tumbling down to pray to the east.

It is by far the best known town in what is known as the ‘Almerian Levante’, which includes the market town of Vera, the mountain eyrie that is Bedar, Turre with its restaurants, the port of Garrucha and Cuevas del Almanzora and its gypsy caves.

By Mediterranean standards, the area is quiet, relatively unspoilt and generally offers lower prices in everything from property to accommodation and leisure activities.

Compared to resorts like Benalmadena and Marbella it is certainly a minnow. 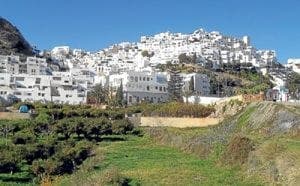 It counts just 8,000 full time inhabitants, with perhaps another 15,000 visitors arriving in the summer.

This small population has meant the village largely remains attractive and unspoilt by mass development, with narrow Moorish streets and charming buildings.

Down on the coast, Mojacar Playa, as it is known, is where the buzz can be found.

Broadly it’s a long stretch of hotels, restaurants and bars stretching from Garrucha to the east and as far along as the Hotel Best Indalo to the west.

Thankfully a long-observed rule to keep buildings down to just two storeys has helped to keep the area special. The beaches, including three Blue Flag beaches, have full service, including a number of colourful beach-bars.

It gets even nicer: beyond the built-up area there’s an extension of pristine, empty coves and playas, leading towards Cabo de Gata.

While Mojacar is the lodestone for the Levante de Almeria, other nearby towns and villages are attractive, with Bedar and the communities of Cortijo Grande and Cortijo Cabrera (both in Turre) standing out as the best of them.

My advice: Come and see it for yourself…I’ve been here for 47 years and there is no way I’m moving anywhere else.

Fiona Govan - 26 May, 2022 @ 17:45
A BRITISH paedophile who changed his name by deed poll and forged legal documents to find work as a teacher in Spain so he...