RAFAEL Nadal grabbed a few minutes to relax with London-based sweetheart Xisca Perello on the eve of Wimbledon 2012.

Fresh from his seventh French Open win a fortnight ago, the world number two has since been chilling out with friends and family at his Mallorca home ahead of the British grass-court Grand Slam, which starts today.

Rafa is playing for his third Wimbledon title, having lost out to world number one Novak Djokovic last year. 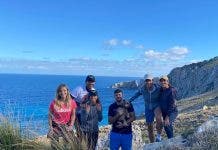