But it turns out he was very wrong.

Ever since the Italian director Sergio Leone descended on the area to make his iconic Spaghetti Westerns, the Tabernas desert – which sees around three days of rain a year – has been flooded by film aficionados.

As I drive through the desert scenery, in Almeria, I am struck by how much it resembles the Wild West of my imagination.

Right on cue I round the corner and find myself confronted by a handsome cowboy who doesn’t look in the slightest bit out of place.

He flashes me a smile and points me in the direction of a dirt track where I can just make out a series of Indian tepees.

The only difference between this and the iconic films is his Andaluz accent.

I am spending the day at Fort Bravo, one of three mock-up Western towns in the area – the others being Western Leone and Mini-Hollywood.

It is easy to see why this out of the way place, 6,000 miles from Hollywood, was for 15 years a Mecca for filmmakers.

It was here that Leone revived the western genre with his iconic Dollars Trilogy, famously scored by Ennio Morricone.

It was also where a young TV actor named Clint Eastwood was made into a movie star. 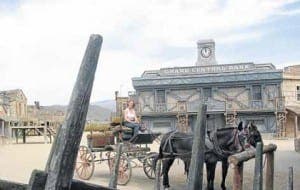 Today Fort Bravo comprises a fort, a ‘typical’ Mexican pueblo and the classic Western Main Street, complete with its own gallows and fake storefronts for banks, hotels, and the county jail.

To get into the swing of things I was driven round on an old school horse and carriage before channelling my inner cowgirl and riding on horseback around the set and surrounding badlands.

The set itself was bought in the late 1970s by Valencia stuntman Rafael Molina, 59.

Today, it is the only one of the three ‘Wild West towns’ that is still used as a set, albeit less frequently than in its heyday.

Most recently the popular Dr Who series shot an episode there using the façade of the central bank.

And several of the stuntmen, seen performing in the shoot outs and saloon brawls on a daily basis, have starred in adverts.

But as more and more people began to visit the set Molina began to transform it into a tourist attraction to cash in.

He initially charged just 25 pesetas (10 cents) a visit but the theme park side of things has slowly begun to takeover.

“There was nothing here in the beginning,” explains Molina, who has worked with many famous people, and once shared his breakfast
with John Lennon, who he mistook for a ‘smelly hippy’.

“Sergio came and saw something. He was an artist and his decision to film here was either really crazy or really intelligent.

“But you could make it into anything; the scenery could be Mexico or America.”

He continued: “They were very bad years in the beginning.

“The Italians came with very little money, and no one knew if it would work and then suddenly the Americans saw how successful the films could be.

“I think the films have a bit of everything, love, vengeance, everything you see in the street; it was real life but from another era when there were strong laws and good versus bad.

“At the height you would have three or four film crews arriving at the same time. You would do one film after another.

“Then the tourists started coming and it keeps growing as we give the people what they want.”

And it certainly seems to be working.

Minutes after I arrived a big group pulled up on a tour bus and it was clear they loved every minute, from the moment they were ushered off their bus and into the saloon at gun point with their arms in the air and grins on their faces.

This of course is the same swinging saloon door that was made famous in the worldwide Pepsi commercial a few years back when football players Raul, Beckham and Roberto Carlos all took part.

The real highlight though is the mock shoot-outs and barroom brawls which thankfully don’t take themselves too seriously and play up to all the stereotypes.

Those taking part are trained stuntmen rather than actors and though the shows are undoubtedly kitsch they make good watching.

“It is hard work and we work long hours but I love it,” explains Alberto Morales Ruiz, 31, a stuntman from Cadiz who trained on a course set up by the studio.

“We change the shows a bit everyday and we switch around the roles a lot although I always seem to be the person that gets killed as I have more experience,” he laughs, assuring me it doesn’t hurt when he is being dragged along the ground behind a galloping horse.

“The key is to keep turning!” I am reliably informed.

But I think I will leave that to the experts.

Instead I wander off in search of a handsome cowboy to
whisk me off into the sunset.