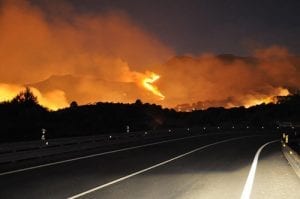 THOUSANDS of people have been evacuated from their homes as a huge forest fire rages on the Costa del Sol.

Around 4,000 people have been evacuated from around Ojen and eight urbanisations in Marbella after a fire broke out in the Sierra Negra area of Coin on Thursday afternoon and continued to burn through the night.

Overnight the fire, which was made worse by strong hot winds, spread rapidly through a 12km coastal strip packed with holiday homes and hotels.

Parts of the A7 motorway have been closed.

Two people have been seriously injured and were taken to the Costa del Sol Hospital in the early hours of the morning.

Meanwhile 13 airborne fire fighting planes were brought in on Thursday afternoon from Malaga, Cordoba and Granada to tackle the blaze which has destroyed 1,000 hectares of forest around Barranco Blanco, between Mijas Costa and Coin.

350 firefighters returned to the scene this morning as the fire continues out of control.