FOR Juan Manuel Sanchez Gordillo, the credit crunch currently crippling Spain proves the model of leadership he has brought to Marinaleda for the past 33 years is what the rest of the world should replicate.

Despite the depressing statistics highlighting the region’s troubled plight, Gordillo is adamant his town of 3,000 people has no such job worries.

Speaking proudly – appropriately in front of a portrait of Che Guevara that adorns his office – the mayor declares: “The truth is there is nobody unemployed in this town.

“If people lose their jobs they can come to the town hall where we will assign them jobs to do in town.

“Be it re-building pavements or laying roads we can give them work that will not only provide them with money but will also improve the area.

“Also, season permitting, there is often work up on the co-operative for those who suddenly find themselves jobless.”

Indeed, working for the town hall, hundreds of local people can be guaranteed €47 for a six-and-a-half-hour day.

And it is this much-vaunted co-operative that has been heralded as a shining light for towns and cities across the world struggling against the global slowdown.

El Humoso is located eight kilometres outside of the village and is a crucial source of work for many residents.

It took 12 years of political fighting for the mayor to finally wrestle the right to cultivate the land for his people from the power of an infamous wealthy landowner, the Duke of Infantado.

Nowadays people even come from nearby towns and villages such as Ecija to work as part of the team.

The very fact that the land is now completely owned by the village is undoubtedly Gordillo’s finest achievement to date.

“Gordillo was the inspiration behind us finally being given this land,” explained co-operative worker Antonio Gomes.

“Every day for two months he would lead us on a peaceful march up here to protest for the right to be granted the land.

“Overall it took many years but he never stopped fighting for what he thought was rightfully ours.”

Since the acquisition of the land, it has been gradually transformed from a barren, dry wasteland to an irrigated and fertile stretch that can grow a huge range of vegetables and fruit.

All the revenue made by selling the produce is re-invested back into the system to buy new tractors or tools and increase productivity yet further.

Such is the community spirit of the town there is not even need for a police force, as the town’s elders assume responsibility for ensuring youngsters stay on the straight and narrow.

Inevitably, the heavy socialist leanings of both mayor and the majority of townsfolk have led to communist parallels being drawn.

However, Gordillo visibly winces when the term is used to describe his model of governance.

“How would you describe someone who is green, socialist and utilitarian? I don’t know what you could use to describe what I believe in.”

What is certain however is the man’s contempt for how the excesses of capitalism have reduced the Costa del Sol’s coastline to a sea of half-built houses standing desolate and unused.

It is a far cry from Marinaleda – where greedy construction firms dare not set foot due to Gordillo’s Buy and Rent strategy.

The building of homes is strictly regulated by the council whereby those in need of housing join a waiting list and are subsequently allocated a plot of land.

They can then choose to actively build it themselves, work alongside town builders or employ a team to build the property.

The process can take up to four years but, once complete, the house will have cost on average, €20,000.

An additional monthly rent of just €15 a month ensures that no building companies could even come close to providing equally cheap housing.

“In my opinion, affordable housing is an essential human right, not a business,” explains Gordillo.

“It is disgusting these companies over-inflate the asking price of homes and destroy our land at the same time.”

And yet Gordillo’s fierce determination to ensure his townsfolk do not suffer from want even extends beyond the essentials of work and housing. 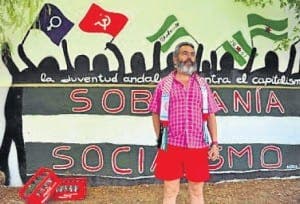 A short walk around the town´s spotlessly-clean tree-lined streets certainly demonstrates that the residents are well catered for.

Despite just a 3,000-strong population, citizens have three municipal swimming pools at their disposal, a state-of-the-art football pitch, gym and a lovely public park.

It is even rumoured that fellow mayors are jealous as whatever Gordillo wants, he often tends to get from the Junta, due to his gravitas and fame.

Either way, the few expatriate residents who number around 10 families, are extremely lucky.

Take Eddie and Pat Norton, 60, from Essex, who cannot believe how lucky they were to stumble across the village four years ago.

“Like a lot of expats who live here, we had no idea about the political leaning of the town or Gordillo’s influence before we arrived,” explained Eddie, 59.

“We decided to move here because it was the cleanest and best looked after town we came across when we were house hunting.

“Gordillo does everything for the village – he asks the people personally what they want to see provided.

“He caters for all ages and makes sure every citizen is looked after from the cradle up to the grave.

“The people love him – when he went to Sevilla for his job march last month half the village went with him. Gordillo is still not scared to take on anybody.

However – as no doubt Gordillo would agree – it would be anything but utilitarian to  prevent it.

Alex Trelinski - 5 Dec, 2022 @ 19:30
SEVILLA has been announced as the headquarters of the new Spanish Space Agency. It beat off 20 rivals to get the government nod which was...