By Rund Abdelfatah and Nigel Goldman

AT this very moment, you could be sitting on a gold mine and not even know it.

Consider all the things stored away in the attic, the garage or that stubborn dresser drawer which requires a serious amount of elbow grease to pry open.

At first glance, all that dust-covered memorabilia might seem like nothing more than worthless junk – but, looking at it another way, it could be a hoarder’s paradise.

That old wooden tennis racquet your grandma used to own or that deck of trading cards you have held onto since you were a lad are likely still around for their ‘sentimental value’.

But what if they are actually worth much, much more?

As the recession deepens and people are forced to tighten their belts, the baby boomer generation, long reputed as master hoarders, is learning to part with its beloved collectibles.

“Since the recession hit, banks won’t loan you money. This has forced many people to turn to pawn broking for a quick and simple way of accessing some immediate cash,” explains Lucy Barnes from Anthony’s

Diamonds, a pawnshop that has been operating on the Costa del Sol for 30 years.

Though pawn broking has had something of a chequered reputation in the past, it is an old trade that, according to Barnes, has been an ordinary part of our society since the great Italian Medici family, way back in the 14th century.

However, its beginnings can be traced even further back to the ancient Greeks.

And while it was initially popular among the poor, in time people from every class and background embraced the industry.

Indeed, even Queen Isabella of Spain is believed to have pawned her jewels to fund Chistopher Columbus’s journey across the Atlantic, which resulted in the discovery of the Americas.

So whether it is jewellery or porcelain, records or sporting goods, ancient items may be a saving grace amid the economic crisis.

In fact, the older, the better. 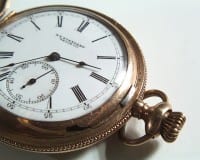 If at least 100 years old, the object is officially classified as an antique and automatically surges in value.

But just because something looks old does not mean it is old.
So what should you be pawning?

Most people keep immediately assume the only valuable items they have are jewels, and for good reason.

As Barnes notes, ‘90% of the business is jewellery, watches and silver’.

Mint-condition promotional recordings can be worth thousands of euros

However, that does not mean Grandma’s ring is automatically worth a fortune.

Unless the jewellery is real gold or silver, it is probably worth relatively little.

If you do discover a gold necklace, ring or bracelet, consider yourself lucky.

Even as paper currencies plummet in value, gold is currently valued at a four month high – the last man standing in the financial crisis.

In general, gold is a bulwark against bad economic news, operating as a money reserve. If you start out with one ounce of gold, you will still own one ounce at the end.

A signed designer or vintage-style piece might also yield a significant profit.

However, while jewellery may be the most popularly pawned item it is certainly not the only type.

“We have lent money on watches, cars, boats, artwork, paintings, silver and bronzes. As long as it has a reasonable value, we are willing to pawn it,” Barnes explains.

Mint-condition promotional recordings from well-known artists like the Beatles, Elvis and the Rolling Stones are all definite keepers. They can be worth thousands of euros.

And some old books can make you a pretty penny. These inlines, ships, trains or movies can sell from €400.

These include good condition photography, art and history books along with collectible first editions from classic authors like Faulkner, Dickens and Austen and a few modern writers like Stephen King.

But here is a key tip: refrain from cleaning your coins.

“Anything you do will disturb the original surface and affect the value,” advises Bob Walter, co-owner of Sam Sloat Coins in the US.

According to Vincent Zurzolo of Metropolis Collectibles in the US, comic books from the 1930s to the 1960s that feature first appearances of famous characters are potential treasure troves.

However, comics from the past 20 years or reprints will not prove very profitable.

Alternately, home decor may be your golden ticket.

However, he warns against 1920s dining sets that are reproductions of 16th and 17th century pieces, which are relatively worthless.

And for sports enthusiasts, those ancient sporting goods in the garage could prove valuable.

While not every pushbike is worth something, a vintage Schwinn bicycle, dating to the 1950s or earlier, has a starting value of nearly €800 – with some retailing for much more.

So how to go about selling?

The value of a pawned item is contingent on several factors: the state of the economy, how in demand it is, and whether similar items are available in a shop down the road (or on eBay).

To ensure you get the best price for your things, keep them safe and have them professionally valued.

Even if you do not wish to sell, have the items assessed for insurance purposes.

There are several venues through which to sell your items.

You might choose to sell through a dealer but, before doing so, make sure you establish rapport with the person to ensure they are trustworthy.

Alternatively, you could sell through a ‘consignment’ shop, which generally charges one-third of the selling price but facilitates, and hopefully expedites, the entire process for you.

Make sure you understand the terms of your contract and their sales practices.

Some shops drastically decrease the price if the item fails to sell in a certain time frame.

If you are looking for a quick option, you might prefer to sell at auction.

However, you have much less bargaining power so you may be disappointed with the selling price.

Finally, you may opt to sell through eBay.

While seemingly the easiest option, online pawning is by no means one click away.

In actuality, you must engage in a long process whereby you first establish yourself as an honest, trustworthy seller and then create a buzz for the object you wish to sell by promoting it on other sites like Facebook and Twitter.

So before you start selling everything in your attic, keep one goal in mind – to get the full value of your objects – and you might just unearth a gold mine. 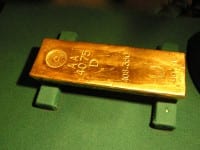 OLD has held a mysterious value for centuries – not surprising when you consider all the world’s gold would fit into two double decker buses.

Its rarity has assured it as a stable store of wealth, and more lately as a currency. When I first started dealing in gold coins nearly 40 years ago, we used to trade gold sovereigns in rolls of 50 coins at just over a fiver each – we were lucky if we made half a crown profit on each coin.

Today a gold sovereign trades for over €310, and the spread – the difference in price between buying and selling – is more likely to be €25 a coin – four times the value of four decades ago.

In 1967 South Africa issued the world’s first one ounce gold coin, the ‘krugerrand’. This has now become the stable unit of gold, and trades at a small premium to the gold price all over the world.

Of course, not all gold is traded in coin or bar form. Much gold trading is now conducted on paper, through spread trading, futures and options.

These are highly sophisticated instruments, with high levels of gearing and massive volatility, and certainly, as I have found out over the years, not for the faint-hearted.