As a noun, it conjures up images not dissimilar to the product of an unmentionable bodily function. Indeed, to be accurate, some blogs aren’t far short of that …

Which is why we need blog rolls … to tell everyone about the blogs we do like, of course!

As a verb, once again there’s a whiff of lavatory humour: ‘You should blog regularly, preferably once a day’ is salient advice for newbies to the ‘blogosphere’. 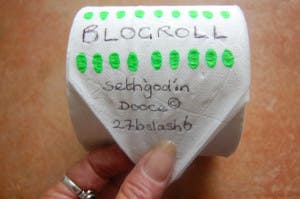 Does that make me verbally constipated, as I blog less than once a week? And could it lead to irritable vowel syndrome?

Furthermore, when partnered with another ‘nerdic’ word like niche (as in, ‘It is important to find the right niche to blog in’), the connotations are faintly obscene.

But the real obscenity is that, after nearly 40 years of promoting the poetry of language through my work, I’ve had to paraphrase my prose and castrate my content (a short post, Beckett, not a five-page mini-series).

Not only am I now expected to understand and refer to this uncouth geek speak (often) in my articles but to become its very personification in my day-to-day life.

Well, you can call me a journalist, a writer, I don’t even mind ‘scribbler’ but, as one who appreciates the sensuality of semantics, I refuse to be referred to as a bl***er!

So why, exactly, am I b****ing, you may ask? Largely because, just as Bogart and Bergman always had Paris (in Casablanca), I believed I’d always have my writing to stave off the bailiffs.

I was so wrong!

So I did a ‘U’-turn and developed my Four Guiding Principles of Blogging:

1. Every other blogger says there’s money it
2. It seems marginally more attractive than a) dying before I’m broke or b) becoming a ‘bag lady’
3. Blog ownership = kudos. It tells people you’re hip to the trends.
4. People think you’re weird if you don’t have one (the two-blog family is already the norm)

There were going to be Five Guiding Principles of Blogging but you live and learn. I’ve had to scrub the one that stated:

A writing career translates into a blogging career at the stroke of a computer keyboard.

The technology left me completely Google non-Plussed and my launch was delayed for months. Almost daily I’d Stumble Upon some new, must-have widget/app/plug-in (do you know the difference?) that I hadn’t been the slighted bit Pinterested in, until I was spammed into believing it was Linked In to my success.

Twitter? I chirruped once but I fell off the perch.

Today, sadder, wiser but at least officially launched as a miniscule mote in cyberspace, it is now as obvious as the dark circles under my eyes that I have merely swapped one demanding boss for another … except that the Internet doesn’t offer sick pay or a guaranteed monthly salary.

(Do I hear smug laughter? My ex-boss must be reading this.)

From being at the top of my game as an ‘experienced writer’, I’ve been ‘born again’ into the nightmare world of the ‘techno-newbie’. From being invited to review restaurants on Marbella’s Golden Mile and sip Bollie at press conferences in Puerto Banús, I now spend my days in a dressing gown along with all the other so-called ‘mouse potatoes’, interacting with robots.

Of course, the Internet is an open source of rags-to-riches success stories. But I just don’t get it. How come that dooce® woman in Salt Lake City earns $50,000 a month from a blog that, at one point, repeated one solitary word for days on end:
‘thinking’
‘thinking’
‘thinking’
(I’m not giving you the link because she doesn’t need free clicks).

Although, thinking about it (the thinking is catching), it’s quite clever and maybe I’m a little envious. 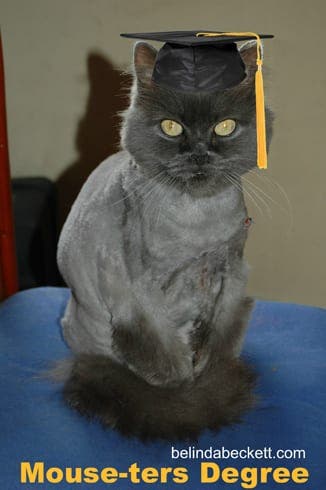 In fact, to be totally truthful, I’m sort of thinking of copying the dog thing with cats. Cat pictures are an internet ‘fur’nomenon and I have three, so it’s less abusive. They can each take a turn!

Today it’s Blue’s turn. (She’s wearing a mortar board because she just got her ‘Mouse’-ters degree!)

I think it could work… Thanks, dooce®!

(Oh, alright, you can find her at dooce.com)