MOST people travelling to Andalucía on holiday or even moving here to live will no doubt be moved by the plight of the thousands of abandoned and stray animals roaming the streets and countryside.

But it takes a certain kind of person to decide they want to do something about it.

From donating, adopting, volunteering and fundraising these determined people with the will to change things for the better are working behind the scenes at a handful of animal charities in Southern Spain and making a daily difference to the lives of animals.

In far too many cases they are saving them from death through starvation or unimaginable cruelty.

Mary Page, chairman of Adana animal rescue, in Estepona, moved to Spain several years ago and while walking her dog in the countryside her and her partner came across a female dog close to death.

She said: “The dog was completely skeletal and looked as though its eye had been kicked in.

“It was a shocking sight.”

Despite taking her home and making daily trips to the vet after a week it was apparent she was suffering too much and Mary reluctantly had to have her put to sleep.

“It was then we realised that although, originally, we had moved to Spain for the quiet life, the problem of abandoned dogs was so great it just couldn’t be ignored,” she said.

Mary then got involved with Adana, which has been running in the Estepona area since 1989.

Set up by English expats and local Spanish people concerned by the growing numbers of abandoned dogs in the seaside town, the rescue kennels take in up to 400 dogs and puppies each year, re-homing around 250.

Last November alone they had more than 60 dogs coming into the centre.

The charity have the all-important kennels, a second hand shop in Camino Padre Cura, Estepona, and a stall at the Sunday Rastro, in Sabinillas, but are entirely reliant on fundraising and donations from the public to fund the €8,000 a month it costs to shelter, vaccinate and feed all the dogs.

The charity have been in talks with Estepona Town Hall (who have a statutory responsibility to provide shelter for abandoned animals) to help with funding in the future but in the meantime they have around 200 dogs and puppies in their care, all in need of homes.

With only three to five volunteers helping out each day and two members of staff, Mary admits there are simply too many dogs. 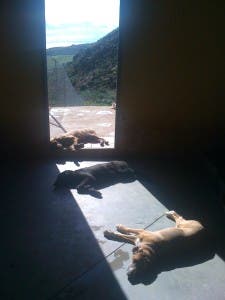 However, putting a dog to sleep is only ever a very last resort.

She said: “All the dogs we take in are checked over by a vet, fed and given shelter.

“Then we advertise the dogs on our website for adoption.

“They are well cared for and we would only ever put a dog to sleep if it was too vicious or gravely ill.”

Earlier this month, a very timid female dog was bought in to the centre who had endured terrible cruelty, both her ears had been cut off and the story saddened many people.

It is now hoped she can be adopted and find a home where she will be treated in the way she deserves.

Another dog, now on her way to recovery and awaiting adoption, was found starving and chained to a tree.

While the Olive Press were at Adana a Danish couple were choosing a puppy to take home, one of the more happier occasions at the centre, the couple were thrilled with their new found friend, who was also clearly grateful to find a proper home. 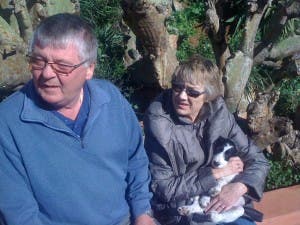 However, homing a puppy is one thing, finding somewhere for an older dog that may not have the ‘cute factor’ is another.

Some dogs have spent half their life at the centre, always being passed by by potential owners.

Mary said: “We have dogs here that may never get homed. It is very sad for them because they would certainly benefit from some human love and affection in their last few years of life.”

An adopted dog, vaccinated, micro-chipped and neutered or castrated, costs €150 and comes with a pet passport.

Older dogs that have been at the centre for a long time will be given to a good home for free.

To see the full list of dogs for adoption or fostering or to find out about fundraising events, volunteering or becoming a flight companion, visit the charity’s website: www.adana.es.

Adana dog rescue is based in Estepona and cares for unwanted and abandoned dogs.

Henry is recovering from a nasty eye infection and needs to be given eye ointment three times a day.

He needs lots of TLC and the vet says his best chance for a better life would be to find a caring home.

Volunteers at Adana have described him as a well-behaved and patient dog.

The Andalucian Rescue Centre for Horses (ARCH) is a volunteer run charity that provides care for abandoned horses and donkeys based in Alhaurin el Grande.

Resident, Indio (see above) is looking for a home.

Animals in Distress (A.I.D) were set up by Jose and Janice Ruiz and their mission is to reduce the amount of stray and abandoned animals in the Coin area.

They moved to the Costa del Sol in 1998 and are now a registered charity with a team of volunteers and foster carers looking after 250 animals a year.

The couple are keen to find a home for Carmen, who came into the rescue centre as a pup a year and a half ago. 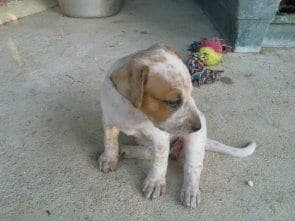 She is a Dalmatian cross who was found in the countryside with her mum.

She is described as a pretty, petite, fun loving pup who likes her walks and plenty of affection.

Other animal charities in Andalucía:

The Marbella and San Pedro based charity cares for around 500 abandoned and abused cats and dogs, offering them shelter while they are found permanent homes.

The charity became affiliated with the RSPCA in the UK in 1994 and works alongside Marbella Town Council.

This Malaga-based charity cares for abandoned and mistreated horses.

The charity are currently trying to find new owners for 26 abandoned horses found wandering the Rio Real municipality of Marbella in a poor state of health.

This Association has a breeding sanctuary in Estepona at Finca Los Pajaritos and is open for visitors between 11am and 2pm on Sundays.

They aim to breed and re-populate the increasingly endangered Andalucían donkey.

Volunteers and fundraisers are welcomed.

The PAD animal charity saves many abandoned dogs and cats and finds them new homes.

Animals can be fostered or cared for permanently.

Based in Pedrera, Spain, the charity has been dedicated to Animal Welfare since 2005. Donations most welcome through their website www.pepisdogrefuge.com