A ROCK used by a farmer to press ham has turned out to be a meteorite worth over €4million.

Faustino Asensio, from Ciudad Real, found the rock in 1980 while tending to livestock with his father.

Sitting on his patio for over three decades, the 100kg rock was used as a weight during the curing process for his family’s ham business.

However, alarm bells rang when Lopez saw a report on meteorite sightings in Spain and decided to get in touch with renowned geologist Juan Carlos Gutierrez Marco.

After several tests, the rock has been confirmed to be a pre-historic metallic meteorite which survived the impact of hitting the Earth.

Only three other meteorites of this kind are known to have been found in Spain.

Bizarrely, the Lopez family said that although they are considering selling the rock should they receive a strong enough offer, they have not ruled out keeping it for themselves.

The family added that the meteorite has been ‘hidden in a safe place’, and will remain there until a decision has been made.

Madrid’s Mining Museum has already opened a display of the discovery, featuring a fragment broken off for testing, along with a full-size replica of the original rock. 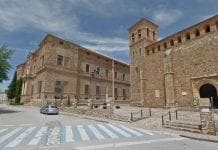 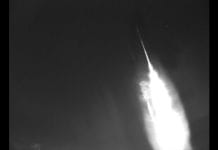 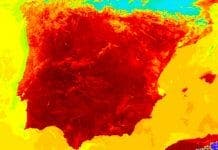