TWO big-hearted walkers have rescued a dolphin in peril after the animal washed up on their local beach.

Expat Annie Millington, 66, was enjoying an early-morning stroll on Playa la Sal, in Casares, when she noticed the dolphin lying helpless on the sand.

Together with another local walker, also an expat, she tried to push the mammal out into the sea but strong waves kept knocking the dolphin back to shore.

Even with the help of a JCB digger and driver, the pair struggled to help the confused animal back into the sea.It is thought that the dolphin was suffering from a brain infection that upset its navigation system and caused it to head for the shore rather than the ocean.

Eventually the little group of rescuers managed to push the animal out into the water, although they were concerned the dolphin would simply wash back onto the beach.

However, after half an hour it had not come back and when Annie returned to the beach the next morning the animal was gone.

“So it looks as though it’s been one lucky escape for this dopey dolphin,” said Millington. 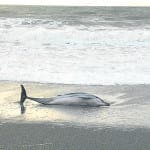