GUARDIA Civil officers have seized a record-breaking haul of hashish in Andalucia.

Officers discovered 52 tons of the drug while investigating an alarm which was ringing at a warehouse in Cordoba.

Just 48-hours before, police made public another huge bust by announcing that 32 tons of hashish has been found in Algeciras.

The find, which is believed to have taken place last month, is worth an estimated street value of €50 million. 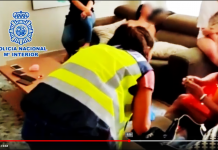