AN environmental group has denounced the Cepsa San Roque refinery for polluting the local atmosphere after photos were posted online of black smoke billowing from the plant.

It comes after the series of worrying photos (right and below) were released by locals near the plant.

Ecologists in Action insists ‘dangerous chemicals’ are still being released into the air and maintenance needs to be much more comprehensive.

Spokesman Rafael Cerpa said: “Widespread sightings of night time releases of waste seem to indicate that the San Roque refinery is taking advantage of the cover of darkness.”

He added: “Pipes should be airtight and nothing toxic can be burnt in the incinerators.” 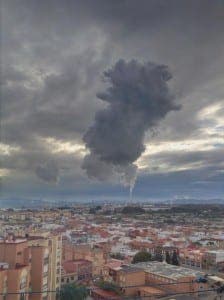 The communities of Puente Mayorga, Campamento and San Roque are particularly affected by the industrial area, but fumes can also be smelt on a regular basis in La Linea some 15 kilometres away.

In March, the Olive Press reported that the factory had spent 17 millions euros on renovating its equipment to improve its security and environmental credentials.

And in its environmental declaration Cepsa listed targets to reduce emissions of toxic sulphur dioxide (SO2) by 500 tonnes a year .

This is substantially down on the late 1990s when up to 30,000 tonnes were released a year.