Its two main beaches Playa de los Lances and Valdevaqueros have received so-called ‘black flags’ from ecologistas en accion for plans to build a massive ‘macro urbanisation’ on virgin land beside them.

The pressure group’s annual coastal report slams the scheme, which comprises 350 villas and 1,400 hotel rooms over 71 hectares alongside Valdevaqueros beach.

Describing it as ‘unacceptable and unsustainable’, the project is to be built on land designated as a UNESCO biosphere reserve, alongside the Alcornocales Natural Park.

The report, which comes out alongside the annual Blue Flag awards, made for particularly damning reading for Andalucia this year.

In total the number of black flags issued is up dramatically to 80 (up from 64 last year), while there are also 97 so-called puntos negros, or black spots (up from 80 last year).

Marbella was awarded an incredible 20 black flags, in particular Linda Vista and Pinillo for recently legalising construction during the GIL era.

The town was singled out as being a ‘bad example for conservation’ with reference to its dunes and urban corruption.

Estepona meanwhile was awarded 14 black flags for its continual abuse of the law and even got a flag for its celebrated El Cristo beach for ‘toxic waste’.

In better news, it emerged that the outgoing ombudsman for Andalucia Jose Chamizo has insisted the Tarifa project did not go ahead.

He said the Junta was duty bound to protect the cultural and environmental values that were generally associated with Andalucia and that the beach was increasingly rare in the region.

Tourism, he went on, should favour a sustainable model that both protected the environment  and at the same time helped the local economy. 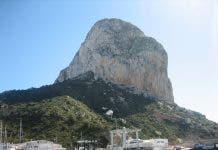 TOP MARKS: Up to 45 stretches of coastline in the Valencian Community classed as having ‘exceptional environmental value’