I USED to hate Cynthia Lennon.

A lot of us teenage girls were a bit psycho, that way, in the psychedelic Sixties; pinning Beatles to our bedroom walls like crazed etymologists; fantasising  about John / George / Paul / Ringo – take your pick – Eight Days A Week.

Cynthia was married to MY John. It was MY hand he wanted to hold.

That was Yesterday. The Fab Four dropped to the bottom of my album collection and Cynthia didn’t cross my mind again for the next 40 years.

And then, last week, she did.

I went to see Julian Lennon’s Beatles Memorabilia Exhibition in Gibraltar and there was his Mum, looking good  (for her age), sharing intimate moments of her life with John from a TV screen.

As it turned out, not quite as I’d imagined…

Being the wife of a Beatle was not such  A Taste of Honey … more of A Hard Day’s Night,  as you’ll discover if you visit this extraordinarily personal exhibition and read between Cynthia’s poignant lines.

You’ve Got to Hide Your Love Away explains her situation, all those years ago. I can see, now, what  I didn’t then.

Among the platinum discs and treasured belongings there’s another story not doing too much struggling to come out, about the husband and dad known to the world as John Lennon.

A bit of a selfish sod, our John, despite his amazing talent! Too much Lucy in the Sky, perhaps…

Well, how would you feel? Your kid is involved in a car crash with your ex and his new bird and you hear it from the TV news! Neither John nor Yoko have bothered to call. Cynthia freaks. John soothes. Jules is fine, woman. Let it Be!

Like a paper trail, the story unfolds  through a timeline of albums and news cuttings.

They met … at Liverpool Art College. “He was blind like me – we swapped glasses and from that moment it was fate.” Was their love affair short-sighted, too?

The proposal … was hardly the stuff of dreams.

“Don’t worry Cyn, we’ll have to get married,”  John told a pregnant Cyn. No twisted arm but no bended knee. (Later, Lennon allegedly described his son as a ‘Saturday night special’ who ‘came out of a whisky bottle’.)

The wedding … was a disaster.  No flowers, no photographs and it rained. They had to shout their vows over the noise of a pneumatic drill. The registrar reminded Cynthia of a funeral director.

The honeymoon … was postponed. (John was working). When they finally got it together at the George V in Paris, it was a bit of a crowd. Two women friends shared the nuptial bed. 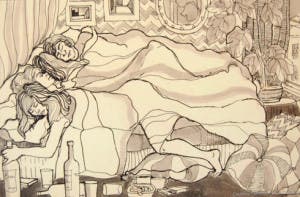 The birth of Julian … went ahead without John. (He was touring in Spain).

Motherhood … was abnormal. Cynthia was constantly mobbed by fans “trying to kiss the Beatle child.”

The superstar lifestyle … largely ignored Cynthia, likewise Princess Margaret when John tried to introduce them at the premier of A Hard Day’s Night.

The divorce was … due to Another Girl. Cynthia sold the memorabilia to make ends meet.  But there’s still a lot to see at the exhibition:

Afterwards you can post a personal note on The Message Tree. Mine reads: I don’t hate you, Cynthia Lennon, any more. But maybe you Should Have Known Better.