A MYSTERY fire has gutted two floors of a well-known furniture business in Estepona.

Police are now probing the reasons behind the blaze at Big Blue Box, that destroyed hundreds of thousands of euros of furniture, most belonging to private individuals.

The fire broke out in the early hours of Friday morning at the Atena Commercial Centre, completely destroying the showroom, as exclusive Olive Press photos show.

As firefighters struggled to control the massive blaze, the area was cordoned off as smoke blew across the nearby main road.

Nobody was injured in the blaze, but investigators are now looking into a series of issues surrounding the shop’s owners Bennie and Debbie Glynn.

In recent months the company had been the subject of complaints by some customers who were unhappy with the service they had received, with several contacting the Olive Press.

A friend of the couple confirmed that they had recently received threats from the owner of a valuable table and chairs, which he claimed was ‘worth tens of thousands, but was sold for just 600 euros’.

“I think the issue scared them a little,” he said.

According to sources, the couple had also recently received a huge electricity bill, believed to be around 15,000 euros, while they denied they had been cut off.

On top of this, in July a group of Spaniards picketed the store, claiming that the couple’s daughter owed them 3000 euros and had destroyed the apartment that she had been renting from them.

Last night, the Glynns insisted the rumours were merely ‘tittle tattle at a delicate time’.

Mr Glynn added: “Loads of people on the coast don’t like us because we are a successful business.

“They are just jealous and spreading rumours. It is a horrible time.”

Big Blue Box specialised in selling second hand furniture for private individuals, who left their items in the showroom.

In a bizarre twist the Olive Press has discovered that the building was the scene of a fatal fire in 1998.

In the tragic blaze, the owner and a member of staff were killed when the furniture store El Mogollin burnt to the ground. 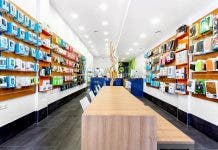