THE Altamira caves have briefly re-opened to the public, eleven years after they shut.

Five elderly Spaniards were chosen by ballot to make the inaugural trip to the caves, which houses paleolithic paintings, in Santillana del Mar, Cantabria.

The caves were closed in 2002 amid fears the art was getting damaged by the carbon monoxide and micro organisms in the breath of the large numbers of visitors.

In January the foundation which manages the cave, which is a UNESCO World Heritage Site, said it could reopen but only to groups of five people a week, and for 37 minutes, until August when the impact of the visits on the paintings would be reassessed.

Overall 192 visitors will be allowed in under the programme. They will have to comply with a strict dress code and wear masks.

The cave, whose walls are covered with paintings that include abstract shapes and animal subjects over a length of more than 270 metres, was discovered in 1868. 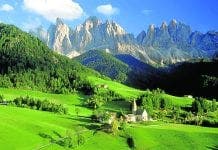 IN PICS: Spain’s five major landscapes and how their gardens grow